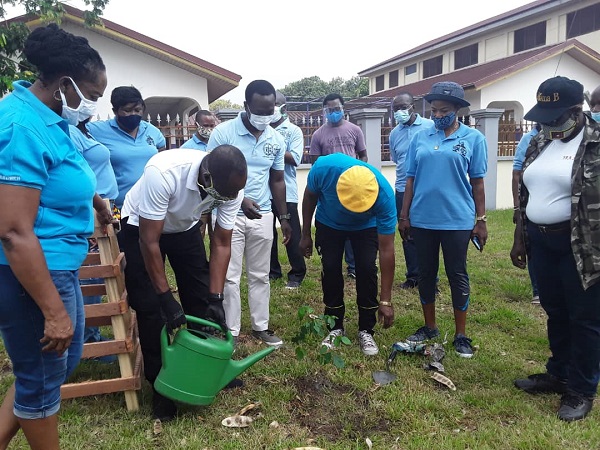 Members of Council 94 and Court 90 of the Noble Order of the Knights and Ladies of Marshall have joined the Adentan Municipal Assembly to undertake a tree planting exercise.

The exercise is in response to a call by Pope Francis to protecting our common home, the earth and to take urgent action to stop climate change and ensure the caring for the environment.

Pope Francis described man’s destruction of the environment as a sin and accused mankind of turning the planet into a “polluted wasteland full of debris, desolation and filth”.

To contribute their quota, the Knights joined the assembly to plant 200 tree seedlings around the church and along the Aviation Road.

The seedlings were all protected with catches and those around the church were entrusted into the care of the Knights and the church.

It was one of the major outdoor exercise by members of the Noble Order, who had to suspend most of their charity and other outdoor activities and meetings because of the COVID-19.

Pleasure of the assembly

In a statement before the exercise, the Municipal Chief Executive Mr Daniel Alexander Nii-Adumoah was excited that the group decided to take up the tree planting exercise because it was within the framework of the assembly to ensure that the municipality was populated with trees.

“The Adentan Municipal is very pleased to join hands with you to plant trees because our intention has always been to plant trees around this area,” he explained.

He told the knights that 67 kilometres of roads that had been paved within the assembly had been earmarked to have trees along them.

Mr Adumoah said there were still a total of 650km of roads within the assembly yet to be done, explaining that when completed those roads would also be needing trees.

He said the reason for the promoting tree planting was simply to mitigate the effect of climate change, “because we are already seeing the effect.”

The MCE said Adentan was about three degrees cooler than the rest of Accra because there were a lot of water bodies around, “and we are also determined to preserve these water bodies to make here even cooler.

“And so, one of our plans has been to plant trees so that the evaporation and everything that goes on will be minimised and our area will be cool,” he explained.

Explaining the implications of having trees around, Mr Adumoah said apart from providing shade for the pedestrians who would be walking along the roads, the trees would help reduce flooding in the area.

Mr Adumuah He said by planting the trees, especially the economic ones, it would be better because such trees would earn the owner some income, aside the shade.

The MCE, therefore, stressed the need to plant more trees, “for our own good and the good of the country because when the impact of the climate is reduced the better for all of us.”

He hinted that more than four groups had proposed to partner with the assembly to undertake such exercise, adding that the knights were the first to have secured the approval from the assembly.

The MCE appealed to societies in the over 200 churches within the assembly to partner the assembly to plant trees to save mother earth, adding, “if each church plants thousand trees, the impact will be phenomenon”.

“So, we are starting with you and as we plant the trees, if you happen to see a tree planted behind your house or in front of your yard, then it now becomes your responsibility to make sure that it grows.

“You are a citizen in Adentan and this is for the rest of the generation coming after us. We are planting the tree and we expect it to be there for the next 20 to 30 years or even more,” he advised residents within the assembly.

He however, explained that wherever there was no house near the seedling, it would be the responsibility of the assembly to ensure that it did not wither away.

“Let us carry on and do the right thing. Let us get on and save our own lives for it is our future that we have in our hands and so let’s do the needful,” he concluded.

The Grand Knight of Council 94, Brother Kobby Annan thanked the assembly for partnering the Noble Order in the tree planting exercise and encouraged the membership of the Noble Order to ensure that the trees were not only planted but taken care of until they fully grow.

Brother Annan underscored the importance of tree planting saying that the trees would not only provide shade they would ensure “our very existence because as the saying goes, when the last tree dies, the last man dies.”

The Immediate Past Supreme Knight Sir Knight Brother Ambrose Yennah, who took part in the tree planting exercise, applauded the Assembly for responding to the call of the Noble Order, “for this collaborative work.”

He was concerned that mankind had for a long time, exploited the resources in the environment to the disadvantage of mother earth.

He was happy that the Adentan Marshallans were taking up such an initiative to start the tree planting to green Adentan and was hopeful that other groups would emulate the example to also plant trees.