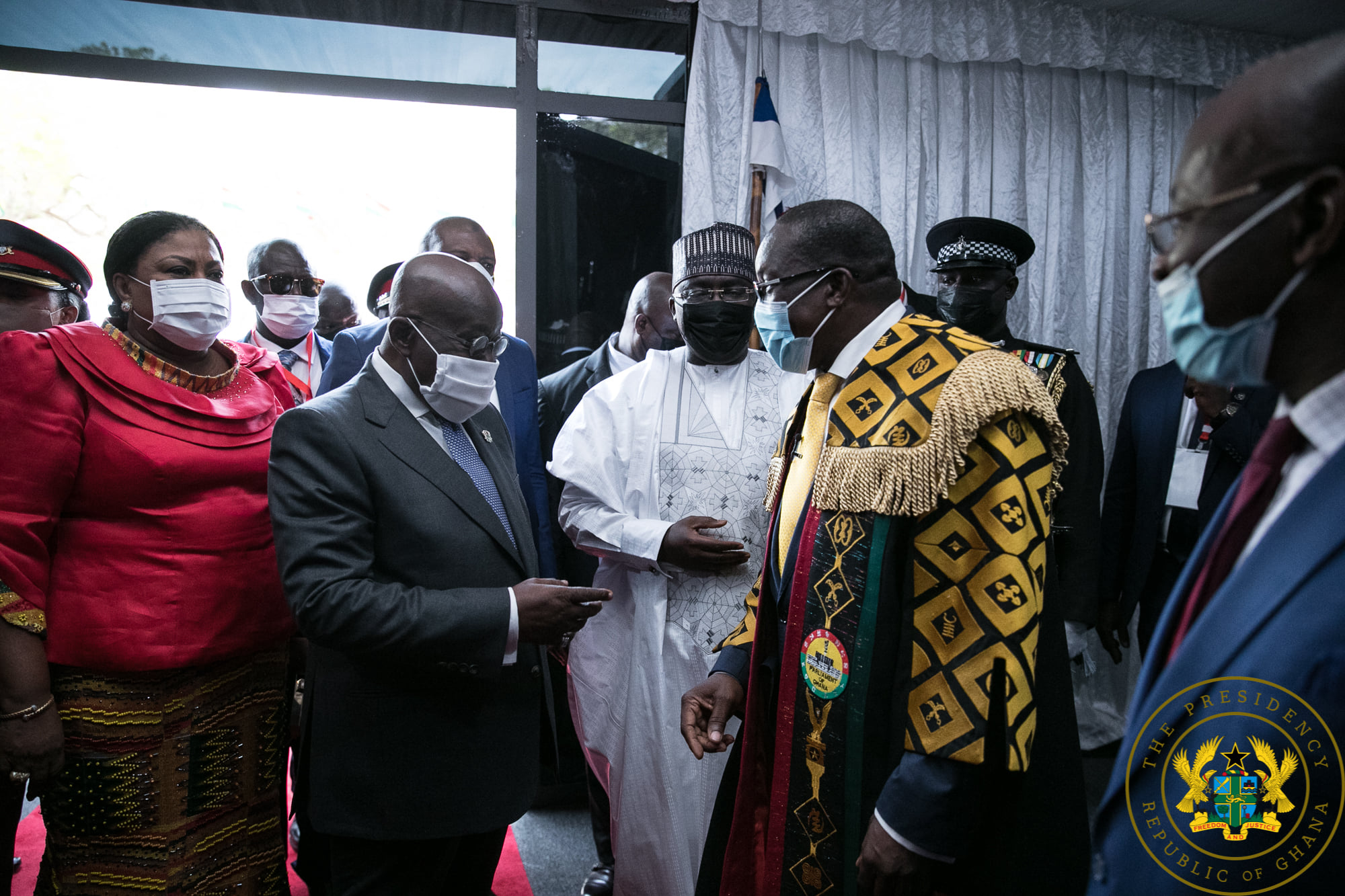 President Akufo-Addo (left) interacting with Mr. Alban Sumana Bagbin (right) at the SONA 2021 in Accra. Those with them include Mr. Osei Kyei-Mensah-Bonsu (2nd right), the Majority Leader, and Mr. Haruna Iddrissu (3rd right), the Minority Leader

President Nana Addo Dankwa Akufo-Addo has indicated his willingness to work with the legislature to improve the well-being of the citizens.

Delivering the 2021 State of The Nation Address to Parliament last Tuesday, President Akufo-Addo lauded the Speaker of Parliament, Mr. Alban Bagbin, who he described as his senior in Parliament.

“Let me use this opportunity to congratulate once again the Speaker of Parliament, the Right Honourable Alban Kingsford Sumana Bagbin, on becoming Speaker of the 8th Parliament. His has been a distinguished career.

“Having entered the first Parliament of the Fourth Republic in 1993 and I came to meet him in the second Parliament in 1997,” the President added.

He outlined some of the different roles that Bagbin had occupied during his close to three decades in Parliament. Bagbin, he noted, was a one-time majority leader and a minister of state.

As Speaker of Parliament, he is the third most powerful person in the governance hierarchy—only after the President and the Vice-President.

“It is wholly appropriate that at such a crucial period in the history of our country, my senior in Parliament and I should work together for the well-being of the Ghanaian people,” the President added.

The President commended the Appointments Committee of Parliament for what he described as their expeditious work in vetting and approving his nominees for the various ministerial portfolios.

He explained that the speed of their work showed the spirit of collaboration.

He, therefore, urged them to continue to work together in such manner as it was what the Ghanaian people wanted of them and as a nation.

“The commencement of this process has been realised by the members of this House and I am thankful to you for enabling government to be duly constituted”.

“The expeditious and thorough manner in which my ministers were scrutinised by the Appointments Committee and their approval by the full House of each of the 29 substantive ministers, was for me the indication of the collective determination of both sides of the House with mutual regard for each other to work together for the good of the country”.

“This is what the Ghanaian people demand from us by insisting on virtual parity in the House between the two major parties of our country,” he said.

President Nana Addo Dankwa Akufo-Addo made this known during his first State of the Nation Address of his second term as President before Parliament.