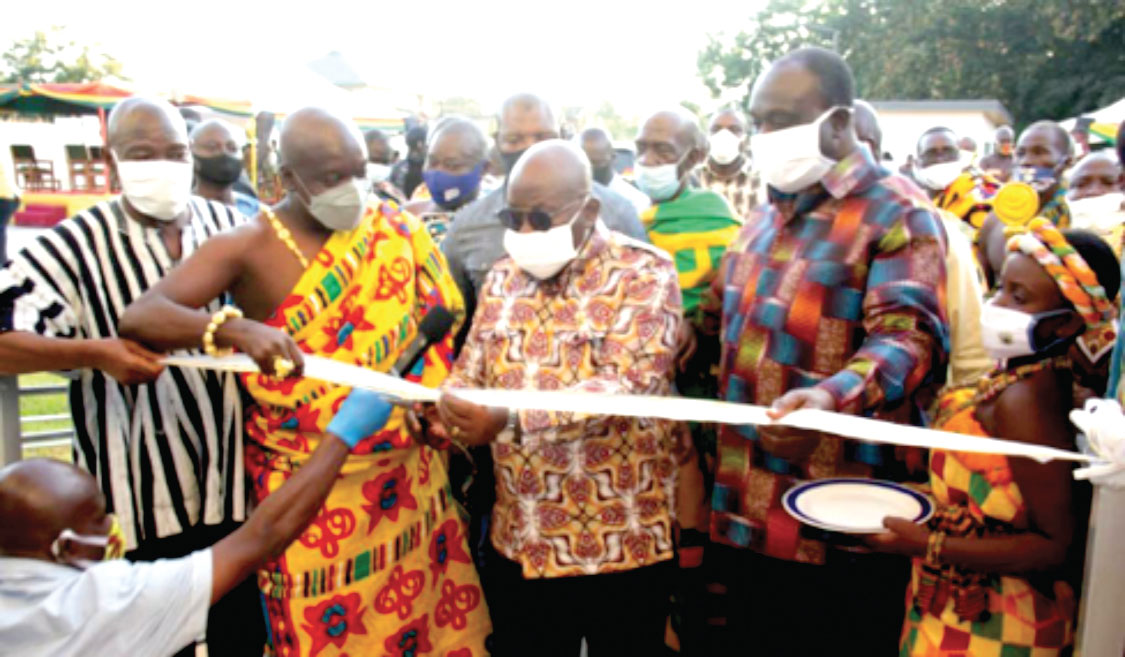 President Akufo-Addo cutting the tape to inaugurate the Business Resource Centre. With him include Mr Alan Kyerematen (right) and Nana Ofei Addo Agyeman

President Nana Addo Dankwa Akufo-Addo has inaugurated an office complex to serve as a business resource centre for the National Board for Small Scale Industries (NBSSI) at Akrade in the Asuogyaman District of the Eastern Region, with a call on the management of the centre to exhibit high maintenance culture.

The President, who cut a tape to inaugurate the centre as part of his visit to the Eastern Region, urged the people in and around the district to consult the officials of the business centre for technical assistance before commencing their businesses.

He noted that the economies of advanced countries came about as a result of deliberate policies geared towards supporting small, medium and large-scale industries.

President Akufo-Addo stressed that the centre would go a long way to strengthen private industries.

He expressed gratitude to the people of the Akwamu Traditional Area who willingly offered the land for the project and called on chiefs of other traditional areas to emulate their example.

The Minister of Trade and Industries, Mr Alan Kyerematen, who assisted the President to inaugurate the centre, also advised faith-based organisations, individuals and other business ventures not to hesitate in accessing business advisory services from the centre to ensure the sustainability and development of their businesses.

The Trade minister also revealed that the office complex was one out of 67 offices to be built nationwide.

The President and his entourage also paid a courtesy call on Odeneho Kwafo Akoto II and had close door meetings with him.