Defunct ‘DKM’ customers to receive their deposits by October 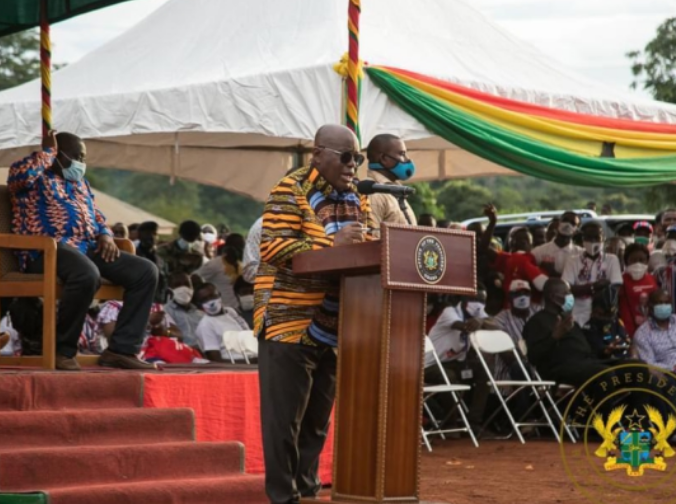 President Nana Akufo-Addo has given the assurance that government will pay back the deposits of all customers of the defunct DKM micro-finance company by the end of October.

He said his administration inherited GH¢70 million debt in the DKM brouhaha from the previous government and that the official liquidator has finalised modalities and customers are expected to receive their deposits as soon as possible.

President Akufo-Addo gave the assurance when he inaugurated the Weddi Africa Tomato Processing and Agro farms under the government’s One-District-Factory (1D1F) initiative at Domfete in the Berekum West District of the Bono Region.

The President made similar comments when he addressed the chiefs and people of Zezera at a durbar in the Jaman South Municipality of the region after he inspected work on the rehabilitation of the 31.7 kilometre Bafaano-Zezera-Adamsu road, as part of his two-day working tour in the region.

It was a night of joy and ecstasy at Domfete when President Akufo-Addo and his entourage, including Ministers of State, Members of Parliament and New Patriotic Party officials arrived at the town around 1900 hours.

The people could not hide their joy as they showered praises on the President for the construction of the factory which would create economic opportunities for them.

President Akufo-Addo said his government would forever remain faithful to fulfil all his campaign promises and to alleviate the socio-economic plight of Ghanaians.

He, therefore, called on Ghanaians to vote and retain his government in the 2020 Elections to see improvement in their livelihoods.

Trade Minister, Alan Kyerematen, on his part said the Bono Region would benefit from 14 factories under the 1D1F to create jobs for the people and push forward socio-economic development.

He said for the past 20 years successive governments had neglected and denied the Berekum township the needed development and praised President Akufo-Addo’s Administration for reshaping the Berekum town roads.

Daasebre Dr Diawuo II said the rehabilitation of the 22 kilometre asphaltic roads had beautified the Berekum township and appealed to the President to push infrastructure development in the two Senior High Schools in the area.

He said the St. Augustine SHS at Nsapor needed a school bus while the Berekum SHS also required classroom and dormitory blocks.

On their part, the managers of the factory, which was constructed with financial support from the Exim Bank Ghana, said 2,700 out-growers had been engaged, but it would require ¢2 million to procure seedlings for nursery and planting to feed the factory.

The factory would help to reduce tomato imports from neighbouring Burkina Faso and to create enough jobs for the people.