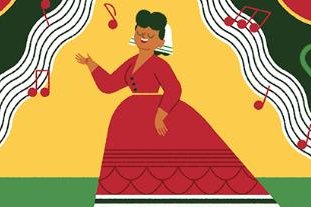 July 6 (UPI) — Google is celebrating internationally-renowned opera singer Ángela Peralta of Mexico, on what would have been her 175th birthday, with a new Doodle.

Peralta was born on this day in Mexico City, Mexico, in 1845. She made her operatic debut at 15-years-old at the Gran Teatro Nacional, a premiere opera house. The performance pushed Peralta to study opera in Italy.

Peralta’s 1862 performance of romantic opera Lucia di Lammermoor in Milan, Italy, earned her a standing ovation that brought her back to the stage 23 times.

The singer toured the world and was known as the Mexican Nightingale for her mastery of opera style bel canto. Peralta founded her own opera company and has an opera house named in her honor in Mazatlán, Mexico.

“Happy birthday, Ángela Peralta. Here’s to all those performances that ended on a high note!” Google said.