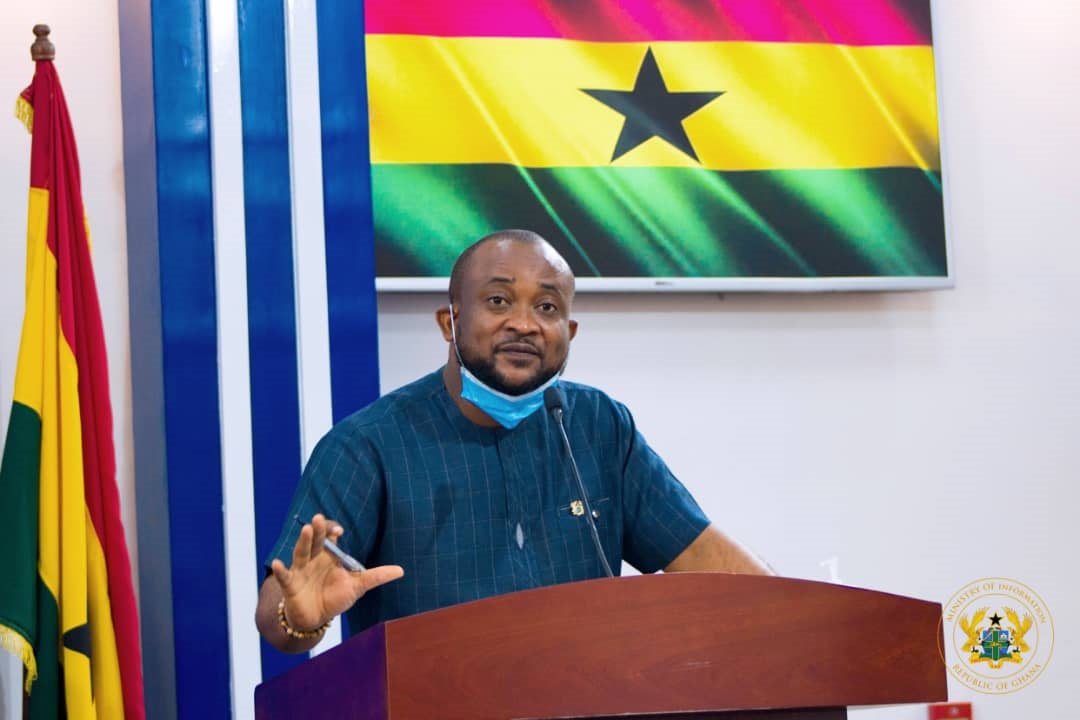 The government says its doors are still open for more engagement with all stakeholders in the minerals sector, in a bid to activate applicable portions of the Minerals Income Investment Fund (MIIF) ACT, 2018 as part of the implementation process of the Agyapa Royalties deal.

The minority at a press conference addressed by the Minority Leader, Haruna Iddrisu, on Wednesday September 2, 2020 stated that the deal among other things has several short-comings in terms of constitutional requirements and reeks of corruption, an allegation government has refuted.

Addressing a media briefing on Thursday, September 3, 2020, the Deputy Minister of Information, Mr Pius Enam Hadzide, negated the claims by the minority and stressed that the government will not engage in any practice that will come at a loss to the nation.

According to Mr. Hadzide, the government’s swift action to addressing the concerns of Ghanaians regarding the Agyapa Royalties deal is a clear testament of a listening government.

“It is noteworthy that government’s engagement with CSO’s may have helped clarify some misconceptions and misunderstandings surrounding the deal”, Mr. Hadzide noted.

Mr. Hadzide further stated that government is keen on bringing all citizens of this nation along with it, as it embarks on the exciting and novel journey of adding value to the country’s numerous natural resources and leverage the country’s assets for a better tomorrow, that’s in keeping with the Ghana Beyond Aid Agenda.

“Government has the welfare of Ghanaians gravely at heart and all its efforts are directed towards securing the future of the people….Government shall continue to work in the best interest of the Ghanaian people, use our nation’s resources to leverage our assets for tomorrow, and that government continues to keep its eyes on the ball”, Mr. Hadzide stressed.

The government has maintained that the approval of five agreements to allow a special purpose vehicle (SPV), Agyapa Royalties Limited, to leverage Ghana’s mineral royalties to secure about $1 billion is in the best interest of Ghana.

The Minister of Finance, Mr Ken Ofori-Atta, has explained that the deal would allow the government to leverage Ghana’s mineral royalties to finance large infrastructural projects, especially in mining communities.

The minister has subsequently dispelled some public assertions that the deal was shrouded in secrecy and raised conflict of interest issues.

He has stressed that due procedure was followed in enacting the Minerals Income and Investment Fund (MIIF) Act, 2018 (Act 978) and the subsequent approval of the five agreements that paved the way for Agyapa Royalties to own the rights to mineral royalties in the country.

“This deal is not hasty, it is not rushed and not shrouded in any secrecy because we have been working at it since 2018. We are confident that Agyapa is going to be the largest company in Africa in the mineral royalty space and it is in the best interest of this country,” the Minister stressed.

On Friday, August 14, 2020, Parliament approved five agreements to allow the country to derive maximum value from its mineral resources and monetise its mineral income accruing to the state in a sustainable and responsible manner.

That would be by allowing the MIIF, created by Act 978 of 2018, to incorporate a subsidiary/subsidiaries and use them as SPVs to engage in pure commercial private sector transactions to maximise the mineral royalties from the 12 gold mines, with four penciled to come on stream in the medium term.

The approval was to enable the country to use Agyapa Royalties as an SPV to secure about $1 billion and leverage to finance mines in Ghana and across Africa.

The yields accruing could also be used to finance large infrastructural projects by the MIIF.

By that agreement, Agyapa, which will operate as an independent private sector entity, will be able to raise funds from the capital market, both locally and internationally, as an alternative to the conventional debt capital market transactions.

The funds, which are expected to be raised from the Ghana Stock Exchange (GSE) and the London Stock Exchange (LSE) through initial public offers (IPOs), will be a long-term capital, without a corresponding increase in Ghana’s total debt stock, and hence without a public debt repayment obligation.

However, following the approval of those agreements, some groups, including the Minority in Parliament, the National Democratic Congress (NDC) and some civil society organisations (CSOs), have raised concerns that the agreements were opaque and amounted to the mortgaging of the future of Ghana.

The opposition NDC raised concerns that the deal was shrouded in secrecy, with its flag bearer, Mr John Mahama, serving notice that he would cancel the deal if he won power.

Additionally, a coalition of 15 CSOs called the Alliance of CSOs working on Extractive, Anti-Corruption and Good Governance, is demanding the immediate suspension of the implementation of the controversial SPV, Agyapa Royalties Limited.

The coalition said until there was full disclosure on the beneficial ownership of Agyapa Royalties, the implementation of the deal should be deferred.

The Minerals Income Investment Fund (MIIF) is racing to float shares of its special purpose vehicle (SPV) on the Ghana and the London stock exchanges before the end of the year.