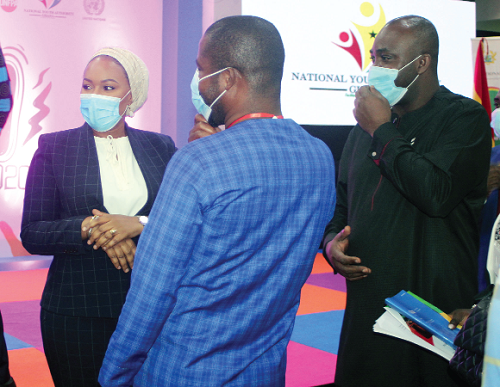 The Government is collaborating with the World Bank to support the development of jobs and skills with an amount of $200 million in the next five years.

The Vice-President, Dr Mahamudu Bawumia, who announced this, said the project was approved by Parliament last month and it was expected to train the youth in apprenticeship, entrepreneurship and skills development.

He said the beneficiaries would also be supported with grants for their entrepreneurship projects.

Dr Bawumia, who was addressing the youth wing of the New Patriotic Party (NPP) in Accra yesterday to commemorate the International Youth Day, said the second component of the project would aim at supporting young job seekers to find jobs through public employment centres across the country.

The meeting, which was organised by the National Youth Wing of the party, attracted regional and national youth coordinators and their deputies.

It was also attended by the Chief of Staff, Mrs Akosua Frema Osei Opare; the National Chairman of the NPP, Mr Freddy Wosemawu Blay; the National Organiser, Mr Sammy Awuku, and the National Nasara Coordinator, Mr Aziz Haruna Futa. Some youth wings of the party in the diaspora also joined in the celebration via Zoom.

In the context of digitisation, Dr Bawumia said the government was aggressively pursuing an agenda to formalise the Ghanaian economy through digitisation.

“We are introducing new and more efficient ways of doing things,” he said, adding that the introduction of the national identity card was a game-changer.

Vice-President Bawumia said in spite of the NDC’s eight years in power, they could not get the national identity card done but under the NPP,  about 13.5 million persons had been enrolled onto the system and it was estimated that before the end of the year, about 16 million people would be registered.

“The national ID cards will become the anchor for formalising the economy as well as integrating the existing national database,” he added.

Dr Bawumia said the government had also decided to ensure that almost everybody in the country would have a TIN number.

With that particular policy, Vice-President Bawumia said the country would suddenly move from less than three million people with the TIN to about 16 million and that alone would change the entire revenue generation capacity of the country.

He said the work had started and by January, 2021, it would be rolled out.

Again, the Vice-President said the NHIS, as well as the Births and Deaths Registry were being integrated with the national ID card so that the NHIS numbers would also become the national ID numbers while the data of newborns would automatically be captured onto the national data.

Listing a number of youthful deployed in the northern zone of the country, strongholds of the major political parties and competitive or swing constituencies.

He said there was a need to start early advocacy against the use of vigilantes in this year’s elections because, “the threat is that there is a de-escalation when advocacy increases.”

A representative of CODEO, Nana Kwabena Aborampa Mensah, said everybody in the electoral process was at risk of suffering from the damage caused by election-related violence and thus called on everyone to play a role in avoiding a violent situation before, during and after the December 7 election.

Mr Mensah, who led a team around the country to monitor the registration exercise, said 20 separate violent incidents were recorded during that exercise, a situation which might send the wrong signals to the international community about the robustness of the country’s democratic credentials.

He said the causes of some of the violent incidents ranged from allegation of people being bussed to centres to register, to people guaranteeing for others who were believed to be sympathetic to their political party but to whom they had no relation, contrary to what the law says.

“Prosecution of offences has been bedevilled with numerous challenges impeding the effectiveness of the process and thereby limiting the success of obtaining conviction in election-related offences.

Chief among the obstacles, Ms Craig identified, was that section 42 of the Representation of the People Law, Act 284 requires the consent of the A-G in writing before the police can prosecute an offence under the Act.

That clause in the law, according to her, must be revised to help speed up the prosecution of election-related offences.

While touching on the significance of the International Youth Day, Dr Bawumia said the role of the youth would be critical for the party in winning this year’s election, pointing out that the government had over the last three years developed and implemented initiatives designed to place the youth at the forefront of national development.

According to the Vice-President, over two million full-time equivalent jobs had been created in the public and private sectors over the last three-and-a-half years.

He said the development was a clear indication that the country had moved from branch banking to branchless banking, stressing that at least 15 million people currently have bank accounts and credited President Nana Addo Dankwa Akufo-Addo for the feat.

“We have about 16 million NIA cards; at the same time the voters register has come out around 16 million. We have about 15 million plus bank accounts and we will also have about 16 million TIN numbers  and so if everything is coming together there will be some consistency as far as the formalisation of the economy is concerned, and the country will from next year be transformed as the data is integrated,” he stated.

On the December general election, Vice-President Bawumia took on former President John Mahama for some of his comments.

He said it was disgusting that Mr Mahama was portraying himself as if he had never been in power before .

The fact of the matter, he said, was that Mr Mahama was in power for eight years but he did not do anything meaningful for the youth.

The Vice-President further catalogued a number of policies and interventions initiated by the Akufo-Addo administration and asked whether former President Mahama was able to create jobs, maintain the nursing training allowance or had a programme for agriculture.