Igba Nkwu All you need to know about the Igbo 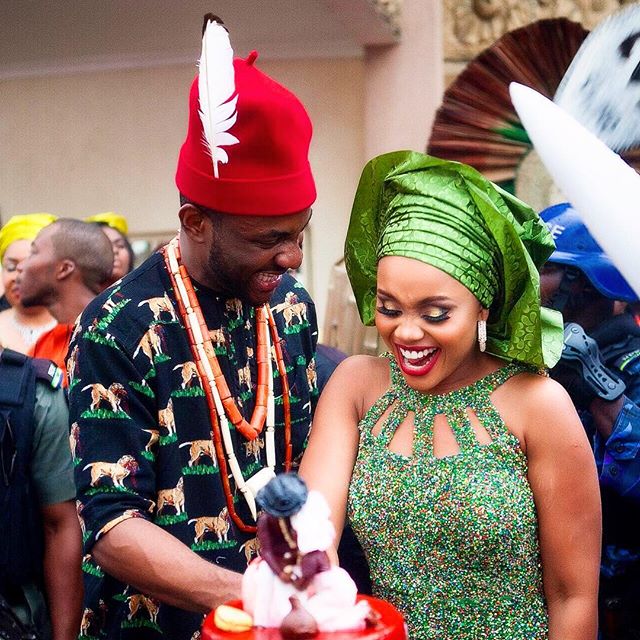 Traditional marriages of these people from the south-east part of Nigeria are deemed very festive, colorful and are divided into four main parts.

1. Marriage inquiry known as ‘Iku aka’ or ‘Iju ese’

4. Wine-carrying ceremony by the bride known as ‘Igba Nkwu Nwanyi’ and ‘Idu Uno’

All these must be completed and the bride’s people must be satisfied before the groom can take away his new wife home.

1. Marriage inquiry known as ‘Iku aka’ or ‘Iju ese’

Unfortunately, tradition doesn’t recognize the modern kind of proposal where the man gets down on one knee and proposes to his girlfriend. The first step of the Igbo traditional wedding rites is the groom visiting the bride’s immediate family accompanied by his father or the eldest member of his family if his dad is deceased. Usually, they are meant to show up empty handed because ‘Iku aka’ or ‘Iju ese’ simply means ‘coming to knock or inquire’ but groom and his family are free to take some hot drinks and kola nut as goodwill.

The groom’s father does the talking; he introduces himself to the bride’s parents or guardian and explains the purpose of his visit the officially announces his son’s interest in marrying their daughter. The bride-to-be is then called out by her parents and asked if she knows her suitor and would want to marry. Her response then determines if they would proceed to telling the extended family and the bride price negotiation.

After the first visit, the bride’s family begin investigation on the groom’s family, they check their background and history (hereditary illnesses, bad behaviors, divorce, fertility etc. are all checked).

This investigation also determines the progress of the next meeting between both families as the bride’s people will then decide if the groom-to-be is good enough to take care of their daughter and their future children. It is also assumed that groom’s family must have carried out similar investigation prior to the first visit.

The next meeting will be between the groom’s family (they can be as much as 20 people) and the bride’s extended family popularly known as Umunna. This meeting is important because the groom’s people have to restate their interest in marrying from their family, they first have to give the groom their consent and the bride gives the final consent, dates for the traditional wedding will be set and bride price list will be sent out. In Igboland, tradition states that the groom take a few gifts along (such as kola nuts, palm wine, beer, soft drinks, tobacco, snuff and a goat). This will be shared between the groom and bride’s family.

After the second visit and consent has been given by the bride’s extended family, the groom’s family can now proceed with the bride price negotiation and payment known traditionally as ‘Ime ego, the groom’s family ask for the engagement gifts list, this differs slightly from place to place in Igboland.

The money paid for the bride price is significantly small and can go for as low as N30, it isn’t an indication of the bride’s worth. The extra gifts to be brought make up the larger part of the bride price. The groom’s family then presents all they’ve bought to the bride’s family on an agreed date or on the day of the wine-carrying ceremony.

4. Wine-carrying ceremony by the bride known as Igba Nkwu Nwanyi and Idu Uno

This is the last and final rite done by the groom’s family. After the date for the official wine carrying has been set, the ceremony is done at the bride’s home and her family prepares a large feast (depending on their pockets) for the groom’s family coming and invited guests, they also hire a live band and maybe traditional dancers to make the ceremony interesting.

Usually, the bride-to-be is dressed in the traditional Igbo wedding attire which include a blouse, a double wrapper, a red coral bead necklace and a big head tie known as ‘Ichafu’ or a bead round her head.

The groom is expected to be accompanied by a larger party this time (friends included) and bring along with him the bride price list. He must present the list along with the required gifts to the Umunna before the ceremony begins.

The highlight of Igba Nkwu Nwanyi is when the bride in public points out the man she wants to marry. The bride’s father or eldest uncle (if her dad is deceased) prays traditionally for the bride, blessing her marriage in future, then he gives her a cup of palm wine (it is usually placed in a gourd) to find the man she intends to spend the rest of her life with.

The bride along with her maidens then goes to find her groom who is hidden in the crowd, as she searches for him with the wine in her hand; she is beckoned by other men and the groom’s friends seated in the crowd to give them her wine. After searching him out, she then offers him the drink in her hand kneeling down.

If he takes a sip, it signifies to the crowd that he is her husband, acceptance means they are officially man and wife. The groom and bride then dance to meet her parents who then pronounce blessings on them. The merriment begins and the couple is given gifts by friends and family.

Idu Uno comes immediately after Igba Nkwu, at this stage; the bride visits the groom’s home for the first time and she goes along with a maiden or her sister who isn’t married to keep her company.

Before she begins her journey, the bride’s family gifts her with items she’ll need to start her new home, these include cooking utensils, bed-sheets, suitcases, boxes, sewing machine, bed, pillowcases, plates, clothes and other essential things she’ll need to begin their new life together. The bride’s sister or family can go back home after a few days to give feedback to her people.