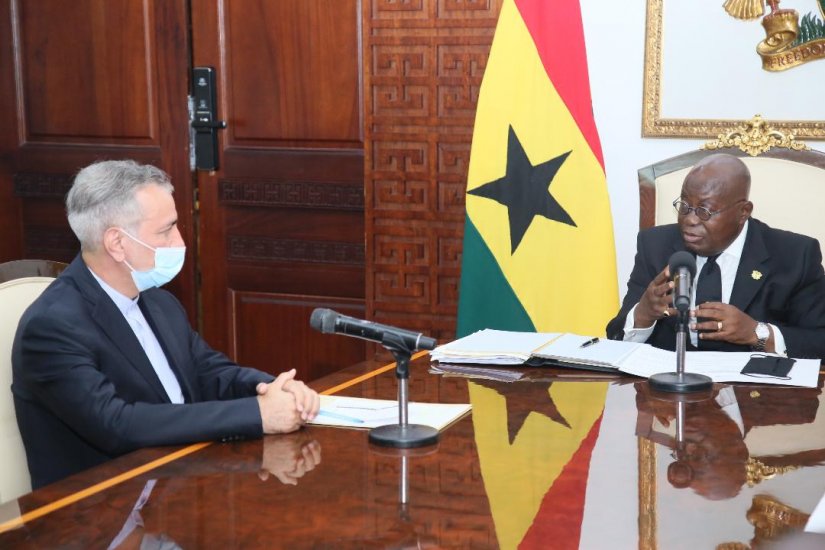 President Nana Addo Dankwa Akufo-Addo Wednesday underscored Ghana’s commitment to promoting ties and cooperation with the Islamic Republic of Iran for the mutual benefits of both countries.

He emphasized that both countries had many shared values and interests, saying: “We have a very good feeling about Iran and we continue to cherish our relationship with Iran.”

The President was interacting with the outgoing Iranian Ambassador, Dr Nosra Tollah Maleki, who had called on him at the Jubilee House, Accra, to bid him farewell after his duty tour of the country.

He congratulated the Persian envoy for a successful tour of duty in Ghana and commended his efforts at strengthening the relations between the two countries.

“It’s common in your business but it’s always a sad thing to say goodbye to a good friend,” President Akufo-Addo said.

He told Dr Maleki that Ghana was keenly aware of the positive collaborative steps between the two nations, particularly in education and health, where his country had offered scholarships, both in Ghana and in Iran.

“Our countries continue to share many common things; we belong to international associations and organisations that have many shared values and interest between us,” the President said.

“We want to continue to build a world in which all the people… are accorded the dignity that should be accorded everybody and to a world where the rule of law is also operational.”

“So we see that there are many many areas of collaboration between our two countries.”

The President was happy of Dr Maleki’s appreciation of the treatment and assistance he received from government officials in Ghana, saying; “That’s what they are meant to be and it’s good to hear the Ambassador saying that. They are good memories you are taking away.”

“We will also count upon you to be an Ambassador of Ghana in Iran and wherever you may be; take the opportunity to extend my warmest greetings to the President, Rouhani,” he said.

Dr Maleki, who described his stay in Ghana as “wonderful,” thanked the Government and people for the love shown him during the period.

He said he had witnessed, during his sojourn in Ghana, marked improvements and positive developments in the country’s economy, politics, peace, security, unity and governance, and expressed the hope that Ghana would have a free, fair and peaceful elections.