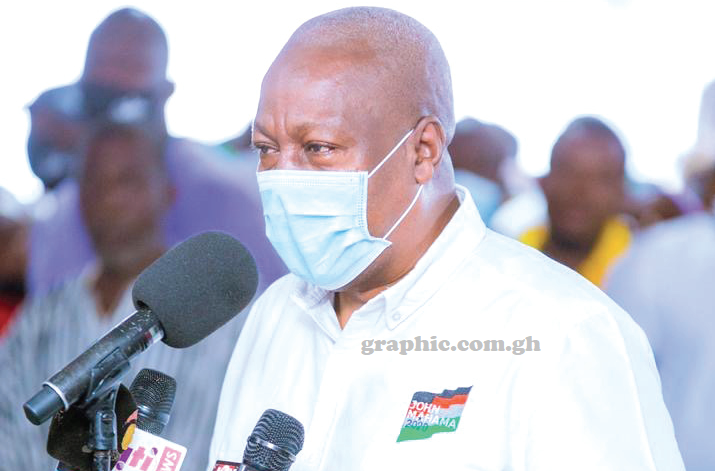 The flagbearer of the opposition National Democratic Congress (NDC), former President John Dramani Mahama, has begun a four-day campaign tour of the Upper West Region with the assurance not to abolish the free Senior High School (SHS )programme but rather improve upon it.

That, he said, would be done by completing the 200 second-cycle institutions he promised to construct during his tenure of office and build more in a bid to abolish the double-track system.

By this means, he said, normal academic sessions would proceed smoothly as it was before the implementation of the double-track system by the New Patriotic Party (NPP) government under President Nana Addo Dankwa Akufo-Addo.

Mr Mahama said this during a courtesy call on the Paramount Chief of Wa, Waa Naa Seidu Fuseini Pelpuo IV and the elders in Wa yesterday.

The former President was met in Wa by a large crowd including many on motorbikes, amid cheers, shouting and tooting of horns.

It was a rousing welcome with the people shouting the name of the former President and running after his motorcade.

He said infrastructure was the catalyst for growth and the key to development and, therefore, when God grants him the grace to recapture political power, he would not relent in his efforts to ensure that every corner of the country benefited from his infrastructure agenda.

As part of his plans, he said he would complete all the projects that had been abandoned by the Akufo-Addo-led administration due to political expediency.

Mr Mahama touted his free primary healthcare policy as a pro-poor policy that would provide primary health care to many people, especially those in the rural areas.

The free primary health care, he said, would complement the National Health Insurance Scheme by making all primary healthcare free for every Ghanaian.

Also, he said, in order to ensure the success of the policy, he would make massive investments in health care by providing the necessary equipment to health facilities and motivation for healthcare workers throughout the country.

“This is to ensure that not only will people benefit from free health care but also quality health care,” he said.

On what he had in store for the Upper West Region, the former President said the region would receive its fair share of all the development policies he would implement if he won the December polls.

He gave assurance that he would complete the trans-African highway from Sawla through Bamahu to the Hamile border post.

The road network, he said, was going to harness and boost the socio-economic potentials of the region, create more jobs for the youth and enhance movement within the area and neighbouring countries in the sub-region. He said the national cake would be equitably distributed to ensure that every region had its fair share.

Mr Mahama expressed his utmost gratitude to the people who defied an early morning rainfall and came out massively to welcome him and asked them to transform that gesture to a massive vote for the National Democratic Congress and himself, come December 7, 2020 for victory.

The Waa Naa, Seidu Fuseini Pelpuo IV, appealed to the youth to channel their energies into issues which would foster development and growth in the country, adding that they should avoid being misused by politicians to foment trouble.

He said no political party could win election through hate campaign and insults since Ghanaians were discerning and “our politics has come of age”.

He challenged people to rather focus on the ideological message of the political parties and decide on which policies would best improve the fortunes of the country.

“The actions and practices of the party must be based on policies founded on a well-defined ideology,” he said.