NDC is desperate, they lie about everything – Tempane MP 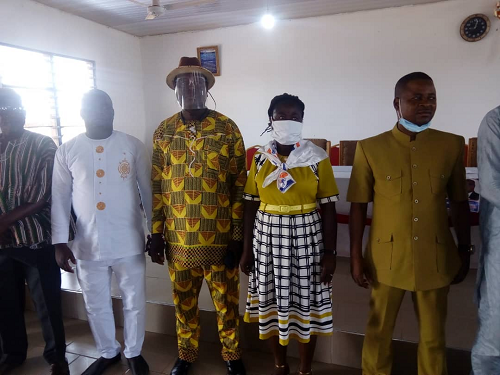 The Member of Parliament for the Tempane Constituency in the Upper East Region, Mr Joseph Dindiok Kpemka has stated that the opposition National Democratic Congress (NDC) have no message for Ghanaians hence they have resorted to “lying about everything to win votes”.

The MP who is also a Deputy Attorney General and Minister of Justice noted that upon the numerous development projects being implemented by the current government to improve on  livelihoods, the NDC particularly in the Tempane Constituency have decided to throw dust into the eyes of the electorate due to their lack of campaign messages.

Mr Kpemka was speaking at the inauguration of a 32-member Constituency Campaign Team for the New Patriotic Party (NPP) in Tempane.

He further accused the former President John Dramani Mahama of doing little to improve upon the lives of the people in the area.

Mr Kpemka who is also a legal practitioner noted that the development that the constituency had received from the current government was enormous and the NDC realizing that their eight years’ achievement could not match that of the NPP, begun propagating falsehood in order to lure voters.

The MP explained that NPP in the Tempane Constituency was the most united constituency in the whole of Northern Ghana and as a result, key stakeholders including the District Chief Executive, party leaders and himself have worked together over the 3 and half years to better the lives of the people.

“Through the Infrastructure for Poverty Eradication Programme (IPEP) alone, we are doing 59 boreholes and through the Ghana Gas, 22 boreholes have been completed and handed over. The Ministry of Sanitation and Water Resources has also completed 10 boreholes while I have personal friends and through them we have drilled two and the Ministry of Finance in collaboration with the Local Government are assisting me to drill 17 boreholes and so when you add them we have 120 boreholes,” he stated.

The Parliamentary Candidate noted that about 15 schools were under construction with funding from the Ghana Education Trust Fund (GETFUND) and the MP’s Common Fund. A polyclinic funded through IPEP was almost completed while Wriyanga and Tempane Clinics have been renovated and 15 motorbikes supplied to health workers across the district.

Apart from the six major roads which are under construction in the district, 53 communities are being connected to the national grid through the Rural Electrification Project. They were awarded in 2019 but the NDC says “they are John Mahama’s projects.”

The Deputy Minister disclosed that Tempane Constituency has the highest number of beneficiaries of Micro Finance and Small Loans Center (MASLOC) in the Upper East Region with about 3,000 women beneficiaries and about 24 women groups. Disbursements of the loans would start by next week.

This and many more, Mr Kpemka noted, has made some of the NDC members to defect to the NPP making the leadership of the NDC to be frightened about losing the elections. They have shifted to taking credit for the current government’s development projects.

Mr Joseph Dindiok Kpemka, the MP for Tempane during the inauguration of the constituency campaign team

“We want to assure everybody here that by the kind grace of God, on December 7, we will be the first Constituency to be announced winner in both presidential and parliamentary elections because we are on our way to a resounding victory,” the MP further assured.

The Upper East Regional Chairman of the New Patriotic Party (NPP), Mr Anthony Anamoo charged the party’s campaign teams in the Region to decentralize their efforts to the grassroots to better educate the electorates about the vision of the party.

Describing the 2020 campaign strategy as “voter tracing campaign”, the Regional Chairman who is also a legal practitioner noted that due to the fight against the spread of the Coronavirus pandemic, there would be scare mass gathering hence the need to go to the electorate at the grassroots.

The District Chief Executive for Tempane and member of the constituency campaign team, Mr Paul Azumah on behalf of his colleagues pledged that they would leave no stone unturned to ensure victory for the party in the December 7 polls.