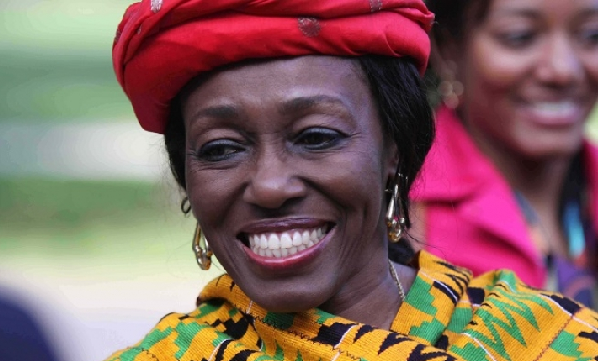 The National Democratic Party (NDP) will tomorrow hold its national delegates congress to endorse and acclaim the founder of the party, Nana Konadu Agyeman-Rawlings, a former First Lady, as its flag bearer for the general election in December.

The party will also use the event to announce a running mate for its flag bearer, as well as elect its national officers.

This will be the second time Mrs. Agyeman-Rawlings will lead the party as flag bearer to seek the mandate of Ghanaians to become President.

A statement signed and issued by the party’s General Secretary, Alhaji Mohammed Frimpong, said the former First Lady was chosen out of three aspirants.

It said a former President and founder of the National Democratic Congress (NDC), Flt Lt Jerry John Rawlings, would be the special guest for the day.

Throwing more light on the event, the NDP’s National Communications Director, Ms. Maame Yaa Edusei, told the Daily Graphic that Mrs. Agyeman-Rawlings’s quest to become President of Ghana was an attestation to the fact that women had a lot to offer the country.

“The former First Lady has been fighting for women throughout her life. She stands tall due to the role she has played since the PNDC days.

She has really empowered women all across the country,” she said.

Ms. Edusei said the NDP was poised to contest this year’s elections and was ready to hit the campaign trail to sell its good message to the electorate.

She said the party stood for participatory democracy and developing the country from the grass root, where everyone would be involved and asked to contribute to the development process.

An NDP government, she said, would not tolerate corruption in any form, while it would also put in place mechanisms that would drastically reduce corruption.

“Our position is to restore participatory democracy for the grassroots to be empowered in order for them to be part of national transformation, ensure probity and accountability and stem graft and recklessness in public office,” she said.

Ms. Edusei said the NDP was in support of certain policies of the current government, such as the Planting for Food and Jobs and the free senior high school (SHS), but would add more modules to further improve on them.

For instance, she said, an NDP government would, as part of the Planting for Foods and Jobs initiative, also promote something similar to ‘Operation Feed Yourself’ which was introduced during the General Kutu Acheampong regime.

“This is to encourage people to engage in backyard gardening to feed themselves in order to prop up their domestic budget and cut down on expenses,” she added.

The NDP was founded in 2012 when it split from the then ruling NDC.

At that time, it cited the NDC’s deviation from key policies of the party, such as probity and accountability.

However, before the split, Mrs. Agyeman-Rawlings had contested and lost the NDC flagbearership to the late President John Evans Atta Mills in 2012.

Their much-publicised tussle led to the formation of groups such as Get Atta Mills Endorsed (GAME) and Friends of Nana Konadu Agyeman-Rawlings (FONKAR).