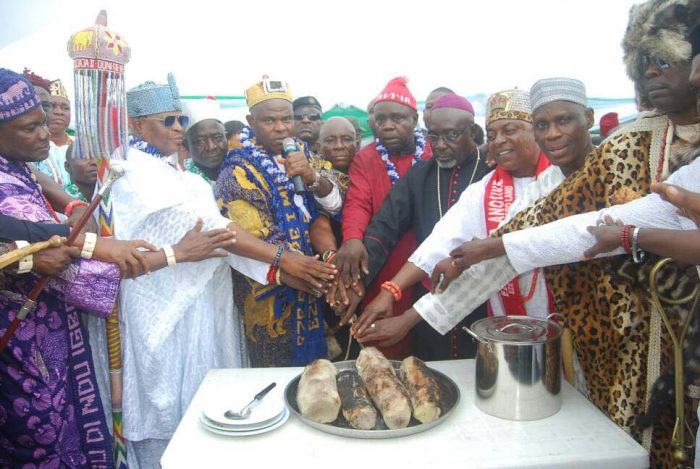 And to depict its prominence, “The New Yam Festival” is celebrated to thank the gods of good harvest.

Being an important event in the calendar of Igbo people all over the world, the festival usually begins with a ceremonial roasting of whole yams by the king or titled elders of the community.

Afterwards, portions of the yams are offered first to ‘Ahijoku’ (the yam or earth gods) which connote a sign of gratitude to God for his protection and kindness in leading them from lean periods to the time of bountiful harvest; the rest are shared and the community can then feel free to consume new yam without incurring the wrath of the gods.

However, despite the fact that the methods and style of celebration usually differ from one community to the next, the essential components that make up the festival remain the same.

Read Also  Everything you should know about Zakatul Fitr

Traditionally, the celebration includes a variety of entertainments and ceremony: the performance of rites by the Igwe (King), or the eldest man, and cultural dances by Igbo men, women, and their children.

Celebrated between August and October, the renowned festival is as old as the tradition in the Igbo land.

In modern times, the festival does not only provide a platform to call home sons and daughters abroad to renew and reaffirm the bond of brotherhood, it also brings to mind a sense of belonging and to plan for community development.

Read Also  Pocketing; The bad relationship that no one deserves

It is very important to state here that contrary to religious belief, the new yam festival has nothing to do with diabolic practices. It is simply the Igbo traditional way of thanking God for giving them the opportunity to cultivate enough yams.

According to an old Igbo myth, there was a time when a severe famine struck. Eze Nri (King of Nri) considered what should be done to remedy the situation.

He later took the drastic course of killing his eldest son, cutting the body into small pieces and burying them.

Strangely, yam tendrils were observed to be growing at the very places where the dismembered parts of the body had been buried. And six months later, the Eze Nri dug up fine large yams from his son’s grave. He cooked it and found it sweet.

Read Also  We Outside: 3 reasons why you should go to a cinema this weekend

And till this day, it is believed that this son of Eze Nri, which is known as Ahijoku, is the god yam.

Another interesting aspect of the festival is the consumption or discarding of old yams prior to the festival day.

And this is done owing to the belief that the New Year must begin with tasty fresh yams instead of the old dried-up crops of the previous year.

Though particular to villages, the new yam festival can also be celebrated in far away countries even in Europe or America; for as long as there is a high chief to bless the yam and the Igbo residents bring yam samples, including rich cultural dances and masquerades, the event is accepted.