NPP, NDC must work together – Speaker 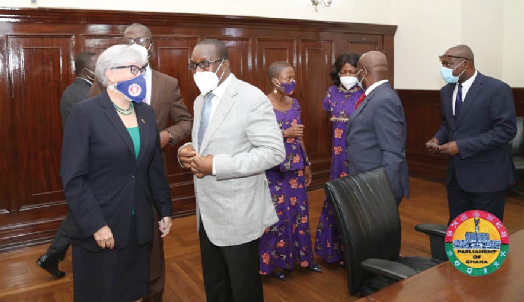 The Speaker of Parliament, Mr Alban Sumana Kingsford Bagbin, has emphasised the need for the two main political parties in the country to work together for the common good of the country and further help Ghana’s democracy to grow.

He said having played a role to build Ghana’s democracy to this level, many Ghanaians were no longer interested in the partisan politics.

He said the people expected the two main political parties – the New Patriotic Party (NPP) and the National Democratic Congress (NDC)– to put the interest of the country ahead of their parochial interests by collaborating more for national development.

Read Also  NPP to launch 2020 manifesto on this date

Mr Bagbin made these comments when the US Ambassador to Ghana, Mrs Stephanie Sullivan, paid a courtesy call on him last Wednesday.

She used the visit to congratulate the Speaker on his ascension to the high office of Speakership.

The two spoke about a number of key issues pertaining to the development of their respective countries. The conversation was also centred on health, agriculture and environmental issues.

The meeting also had in attendance, the leadership of Parliament including the Second Deputy Speaker, Mr Andrews Amoako Asiamah, the Majority Leader, Mr Osei Kyei-Mensah-Bonsu, the Minority Leader, Mr Haruna Iddrisu, as well as the Clerk to Parliament, Mr Cyril Kwabena Nsiah.

Mr Bagbin also spoke about the need to strengthen the institutional capacity of the legislative branch of government, to ensure that the democracy thrived and stressed the need for “Members of Parliament to be given offices and personnel in their constituencies for ease of consultation and work in the constituencies.”

Mr Bagbin expressed gratitude to the Ambassador for the visit and expressed the hope that the good relations between Ghana and the United States would be further strengthened.

Ambassador Sullivan, while congratulating the Speaker on his appointment, also commended the Appointments Committee of Parliament for the good work it did in vetting the various ministerial appointees of the President.

She said the way the committee conducted its business during the vetting process sent a strong signal that Parliament’s work would not be business as usual.
“Parliament now takes its scrutiny duties very seriously,” the US Ambassador said.

Mrs Sullivan also spoke about the need for strong trade relations between the USA and Ghana, making reference to an earlier statement by the Majority Leader, Mr Osei Kyei-Mensah-Bonsu, which stressed the need to strengthen the private sector since it was the engine of growth.

Mr Kyei-Mensah-Bonsu spoke about the benefits of the many exchange programmes between the two countries and emphasised the need for improved trade relations.

The Majority Leader stressed the need to further strengthen the private sector as the engine of growth for any economy.

Mr Iddrisu also expressed concern about the indicators used for measuring child labour and child trafficking, which portrayed Ghana in a bad light.

He, therefore, urged the US to posit the phenomenon in its proper context, saying that “by our culture, Ghanaian children do assist their parents and relatives in their economic endeavours and this, by no means, has nothing to do with child labour,” he said.

The Minority Leader further spoke about the menace of money laundering and called on the US to help state institutions to block illicit transfer of funds.