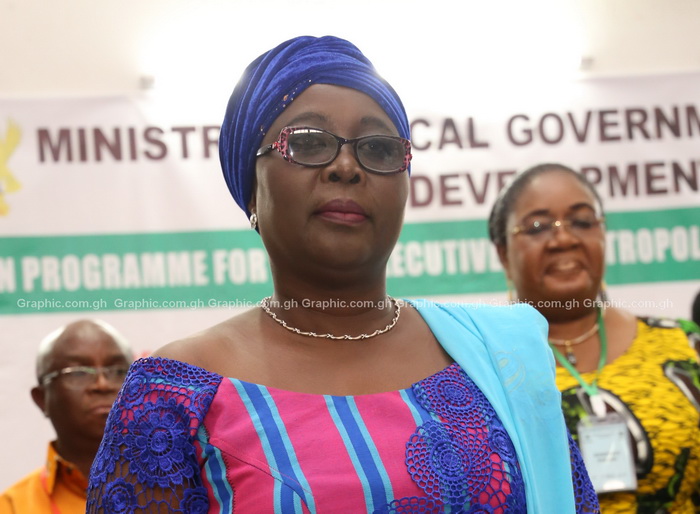 The Minister of Local Government and Rural Development  (MLGRD) , Hajia Alima Mahama, has given a firm assurance that the New Patriotic Party (NPP) government will ensure the partisan election of Metropolitan, Municipal and District Chief Executives (MMDCEs) in its  second term in office.

She said when re-elected, the NPP government would activate a process for consensus building towards the amendment of certain constitutional provisions to pave  way for MMDCEs to be elected on partisan basis.

The minister stated this at a Meet- the-Press series held in Accra last Friday at which she outlined the achievements of the Local Government Ministry over the past three and a half years.

The election of MMDCEs was one of the manifesto promises made by the NPP in the run-up to the 2016 general election.

Upon assumption of power, the government activated processes to keep that promise by ensuring the review of some articles in the 1992 Constitution to pave way for the MMDCEs to be elected.

The articles that were amended were Article 243 (1) on the appointment of MMDCEs by the President and Article 55 (3), which prohibits the involvement of political parties in district level elections.

The process, however, halted after President Nana Addo Dankwa Akufo-Addo withdrew the bill from Parliament, citing lack of consensus from Ghanaians.

Determined to see through the election of the MMDCEs, the NPP made a fresh promise in its 2020 manifesto that was launched on August 23 to ensure that the Chief Executives of the MMDAs were elected on partisan basis.

Throwing more light on that promise, she said the President had demonstrated commitment to fulfilling that promise by clearly putting out a roadmap that saw the referendum for Amendment of Article 55(3) towards the election of MMDCEs:

“A Roadmap to guide the Referendum process for the election of MMDCEs was developed, and following Cabinet approval, stakeholder consultations and sensitisation were conducted across the country and the   processes for amendment of relevant provisions of the Constitution (Articles 55(3) and 243) commenced,” she said.

The minister said the government was committed to ensuring popular participation in local democracy which was why it created 44 new municipal and district assemblies and elevated 32 districts to municipal status.

She added that the government had completed 23 office accommodation buildings commenced in April, 2016 for selected MMDAs by December 2017 and constructed 72 administration and assembly blocks.

Apart from the capital projects, the minister said the MLGRD ministry had collaborated with the Institute of Local Government Studies (ILGS) to conduct a National Orientation and Training Programme (NOTP) for the newly elected and appointed assembly members.

She said 9,079 new assembly members benefitted from the programme.

“Pursuant to Section 18 of the Local Governance Act, 2016 (Act 936), a new Model Standing Orders for MMDAs has been developed,” she said, adding that those initiatives had improved the knowledge base of the assembly members.