Our Officers were not dancing to Mahama Afa – Ghana Police 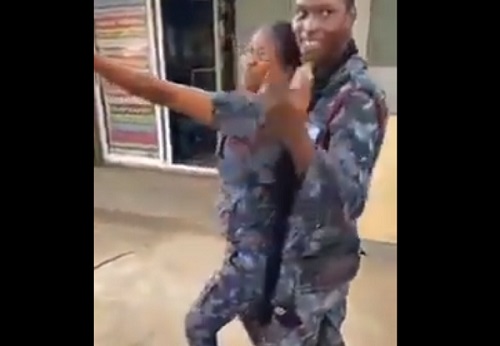 A screenshot from the viral video

The Ghana Police Service says its officers who were recorded cavorting in a video were dancing to Tingasa a song by Nigerian musician Naira Marley and not a political campaign song, as has been suggested by some social media users.

The Police in a Facebook video said the clip which has been widely circulated on social media was recorded while the officers were waiting for their vehicles to be refueled for patrol duties at the Police Headquarters on April 2.

According to the Police, the song was being played at a shop opposite the Police Fitness and Social Centre which is adjacent to the Police Headquarters.

The Police statement suggests that that video has been edited with Kojo Bee’s Mahama Afa replacing Naira Marley’s song.

In Kojo Bee’s song, he raps about how former President Mahama would win the 2020 Presidential elections easily.

Hawa Koomson must be cooling off. 14 #WASSCE students (kids) ‘ve been dismissed with alacrity 4 going haywire regardless of their remorsefulness. I hope nothing happens to these service personnel for dancing #MahamaAfa
Akufo-Addo, John Mahama, #thebigissue, #Newsfile #4More4Nana pic.twitter.com/YbnQN4GpU5