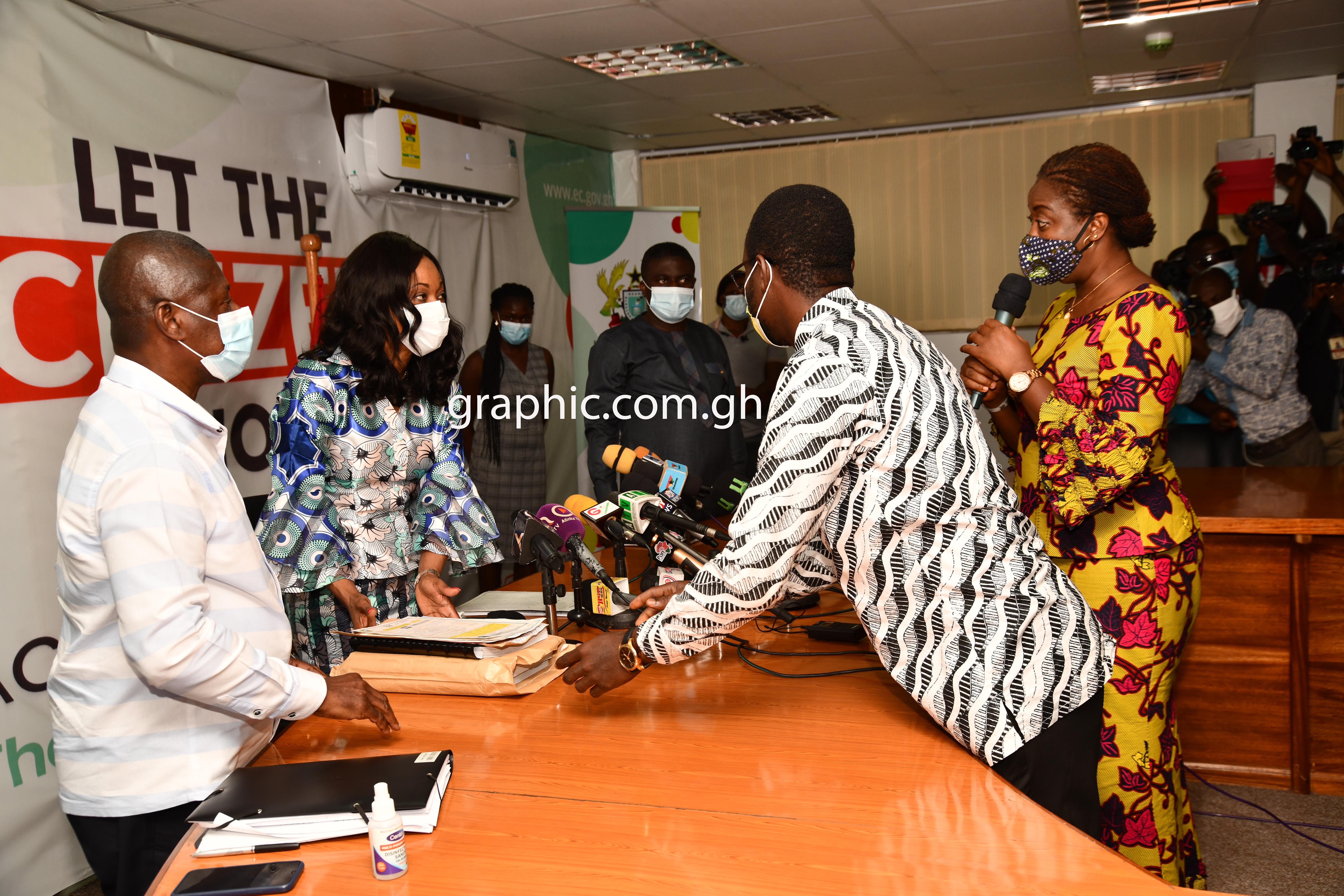 Two political parties showed up at the Head Office of the Electoral Commission (EC) in Accra Wednesday to submit the completed nomination forms of their presidential aspirants.

Executives of the Progressive People’s Party (PPP) were the first to turn up about 4.30 p.m., although they were scheduled to submit their forms at 2 p.m.

Then came executives of the National Democratic Congress (NDC), who were was also billed to present the forms of the flag bearer of the party, former President John Dramani Mahama, at 11 a.m. but showed up about 5 p.m.

The flag bearer of the PPP, Ms Bridget Dzogbenuku, who presented her nomination forms and a bank draft for the filing fees to the Chairperson of the EC, Mrs Jean Mensa, was in the company of the National Secretary of the party, Mr Paa Kow Ackon.

After submitting the forms, Mr Nketiah indicated that per the electoral laws of the country, there must be a certified voters register before the filing of nominations began.

He said it was not proper for the filing of nominations to be done based on a provisional register which was currently undergoing exhibition.

“It is unfortunate that a mature democracy like Ghana will go into an election as if we have not tasted democracy before,” he lamented.

Mr Nketiah explained that due to the use of the provisional register, some of the party members who endorsed the nomination forms of the flag bearer called to inform the executives of the party that their cards had been duplicated and had been called by the EC to come for new voters ID cards which were different from those they used to endorse the forms.

He said that delayed the NDC’s process of completing the nomination forms for presentation.

Mr Nketiah also noted that there were some errors on the nomination forms that were put on the EC’s website for downloading.

“We are going ahead with the process because we don’t want to create problems for the country, but we are going into the elections with the conviction that if you are eating with the devil, you go in with a long spoon,” he said.

“We want to put on record that we are filing the nomination because they say so; we will not boycott the elections but will contest and win,” he said.

Responding to the allegations, a Deputy EC Chair, Dr Eric Bossman Asare, explained that the EC was operating within the confines of the laws governing its operations.

He said the commission was not interested in doing anything untoward to mar the electoral process.

“We want to put on record that CI 127 is very clear that a registered voter is a person whose name appears on a provisional register,” he said.

He also explained that the errors on the nomination forms had been corrected earlier.

Mrs Mensa told the NDC team that the EC would have wished that the party’s flag bearer and his running mate were present to submit the forms.

“As a commission, we would have wished that the flag bearer of your party, former President John Dramani Mahama, and/or the running mate, Prof. Jane Naana Opoku-Agyemang would have been here personally to present the nomination forms, as it would have allowed us an opportunity to engage with him on some of the issues he has raised and which we have heard in the media,” she told the delegation.

She re-emphasised the importance of the process of filing nomination forms, noting that there could not be elections without the process.

Ms Dzogbenuku called on the commission to consider reducing the filing fees for women who sought to contest for the highest office of the land to serve as motivation for women to participate in the country’s politics.

“We will be happy if you can give us a discount to encourage women who have been deterred by money constraints,” she said.

Mr Ackon told the Daily Graphic in an interview after the filing process that the PPP would introduce the flag bearer’s running mate this weekend, after which he would start making public appearances. Pull quote We want to put on record that we are filing the nomination because they say so; we will not boycott the elections but will contest and win.