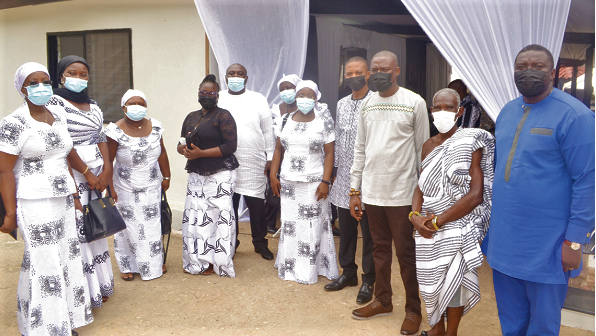 The late Mrs Afful was a sister of late President John Evans Atta-Mills.

The donation was made on behalf of the President last Sunday by the Central Regional Minister, Mrs Justina Marigold Assan.

The minister was accompanied by the Metropolitan Chief Executive of Cape Coast, Mr Ernest Arthur; the Central Regional Secretary of the ruling New Patriotic Party (NPP), Mr Takyi Mensah, as well as some staff members of the Regional Coordinating Council (RCC).

She urged the family to remain united and continue to espouse the virtues that former President Mills stood for.

“I urge you to build upon former President Mills’s peaceful nature and humility which were important legacies left behind that brought a lot of attention to him when he was alive,” Mrs Assan indicated.

Grateful
On behalf of the Nkuma-Kyereba Twidan family, Cape Coast, Okyeame Kojo Hagan thanked President Akufo-Addo for the gesture towards the children, siblings and extended family of late Mrs Afful.

Delivering the sermon, the Synod Secretary of the Evangelical Methodist Church of Christ (EMCC), Very Rev. K.B. Micah Edu-Buandoh, advised workers to put up positive attitudes towards work and desist from acts that had the tendency to slow down the progress of the nation, saying “if you are a worker either in the government sector or private sector, you must eschew acts that will bring down such establishments”.