Pulse First Love: I dated my lecturer who is 10 years older than me

Pulse First Love: I dated my lecturer who is 10 years older than me 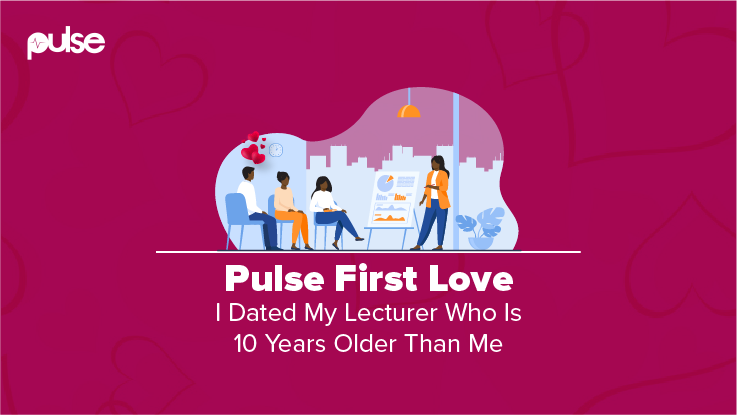 Today’s #PulseFirstLove is a story that’s unconventional for many reasons. First, it is told by a man who dated his lecturer; a very rare occurrence that is only matched in rarity by the fact that she is 10 years older than him. It actually gets wilder. Eight years on, and despite getting married to another woman, he and his former lecturer remain an item and won’t be separating soon. Read on.

Can you remember the first time you had a crush on anyone?

First crush when I was 16. Fathia [Not real name] was the girl that everyone wanted. I had this great sense of humor that made me quite likeable to everyone in those days. I was also a gifted footballer. So each time I scored a goal, I would say “this is for Fathia”. But funny enough we were not close, just classmates. She didn’t even like football either but friends would always tell her that Lukman always dedicates his goals to you and you guys are not even friends. When we got to SS3, she asked if I liked her. I jokingly said yes but she handed me a piece of paper with her number and the rest is history.

So when was the first time you ever fell in love?

200 level during my undergraduate days. She was my lecturer.

How did you meet her? And what was it about her that made you fall for her?

She was this young lecturer in the department who was full of feminine elegance and very brilliant. She was also separated from her husband. I got her number from someone who had it in the department and called her one evening. I said I was one of her students and that I needed to discuss something personal with her.

Wawu. You have liver, sir.

She was hesitant at first but she later asked me to meet her at a public place. So we met there and she asked what it was I wanted to talk to her about. So I told her that I couldn’t concentrate on my studies because of her.

She was shocked as well. She asked if she’d done something but I told her no and that I could not get her off my mind. You know, I just mentioned that she was the constant object of my attention. She was surprised, of course. She could not even say anything.

What happened after this?

She actually stood up and walked away after what I said. Of course, there was nothing I could do so I let her go. But I texted her later.

Omo, where did you get the liver to do all this?

So what happened after that?

She asked me to meet in a private resting place the following day.

So that’s how you guys started dating?

Yeah. I think what helped was my boldness. She was actually 10 years older than me.

How old were you at that point?

Tell me how that relationship went.

She was very understanding and mature. I think that is the summary of it all.

How long did this relationship last for?

And how did you guys manage to keep it on the low, especially before you left school?

She was rich and independent; stayed on the town’s outskirts all by herself. That really helped. Also, the fact that I attended the university in my hometown helped the relationship to last that long.

What did you love most about your time with her?

My freedom to explore and date other girls even though we were madly in love. Her romantic and sexual style. She taught me everything I know about love making. My wife is even grateful to her.

Yeah. I am married now. She encouraged and supported me to marry.

Wait. So, you’re still together?

Yeah. We are still on but not serious. Anytime she needs me and I am free, we’ll arrange to meet. I guess I’m just into older women like that. I can’t even tell why. Even my wife is four years older than me.

Did you ever date any babes that were your age mate or younger than you?

Back to your first love: do you see yourself ending things with her any time soon?

We are more of friends than lovers now. She is very free and understands me more than anyone. I know and understand her more than anyone, too. The reason why I can’t leave is because she is sterile and can’t give birth. We have explored all medical and orthodox options but all to no avail.

Yeah. And I think she’d be lonely if I leave her now. Plus she cares about my wife and kids like her own family. I feel lucky to have her in my life.

Does your wife know about this?

She only knows that we are best of friends. She doesn’t know about the other one. My top secret. She can’t complain because she is always there for her.