Pulse First Love Mine was a whirlwind introduction to sex 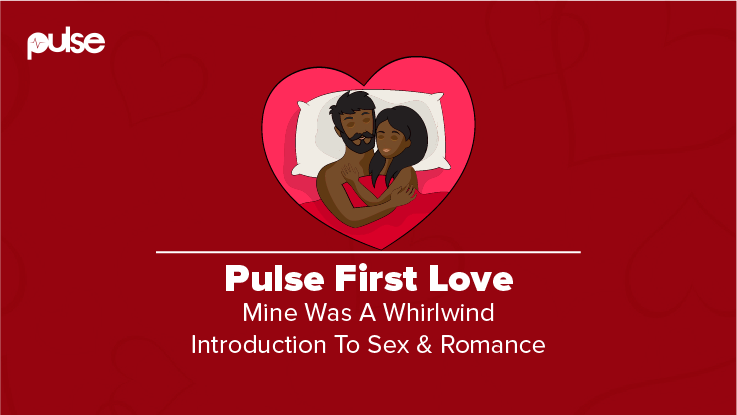 The story on #PulseFirstLove today is told by a man who had a very rude awakening to the ways of the world when he was 18. He says his first-ever girlfriend introduced him to relationships, romance, and everything in between. But it was only exhilarating in part. The rest of it was chaos.

Tell me about your first crush

My first crush was on some girl in our church back then. I must have been 12 or 13 at the time and she was just absolutely the most gorgeous thing I had ever set my eyes on. So, yeah, that is my earliest recollection of crushing on anyone.

What became of the crush?

Uhm. Not much honestly. We were friends by virtue of attending the same church and occasionally being around each other in the children’s church but that was pretty much. Mind you, I had a rather weird relationship with these things.

My folks rarely allowed us to mix with other kids. School and church were the only places where we could be free to do that. And then we were in an all-boys school. So rolling with girls who were not our cousins wasn’t something we were not so used to.

Ah I see. So this affected your ability to properly crush on this particular girl?

Lmao. Not exactly on the ability to crush. More like not knowing what to do or even how to converse properly. I was terribly shy and tongue-tied most of the time around babes. So, yeah, that was how it was with her. Mind you, I was about 13 at this point, so you can imagine.

Read Also  What should be the first drink you should have in the morning?

Lmao. Must have been nice.

Not exactly but let’s et back to talking about you. It’s safe to say nothing came out of that crush

No. Nothing came out of it.

When did you eventually get into your first relationship?

It took forever o. And it was even because there was this particular girl who had a crush on me when I got to school. I attended this private university in the east and for some reason, this girl was all over from like the third week. It weirded me out at first, considering how shy and extremely wary of women I was at the time. But she simply wouldn’t give up and eventually I relaxed and we slowly became friends.

Wait. When you say she wouldn’t give up, what do you mean?

Uhmm. So I was running into her very regularly. LOL. Her department was close to mine and we were taking some courses together as well so that made quite easy for that to happen. And she would just be nice to me in a way that I couldn’t wriggle myself out of without being an extreme jerk. Mind you, I turned down this babe’s lunch offer for almost two weeks until I gave in.

It was like she was determined to unlock the mute guy who never spoke and rarely mixed with anyone. But eventually we became friends and it was actually nice. I kind of appreciated it, to be honest. And she liked it immensely as well. She actually admitted that. She was the only one I spoke with, the only person I was free with. If I wasn’t with her, I’d be in my shell. When she showed up, I’d be a totally different person. It was really nice.

Read Also  Stingy boyfriend? Here are 3 ways to turn that around

So a relationship was inevitable?

Not for me. I was so cool with just exploring the sweetness of what we had. Mind you, this was my first time of having such a close relationship with a girl and I was just cool with all that. I was also a virgin at this point and in my mind, I would be one till I married. Don’t forget my upbringing I mentioned earlier.

Sure. But plans changed, didn’t they?

Oh. They did. After a while, this babe asked me what we were, spoke about how she’d love for us to be more than friends and believe me, all of it was strange and new to me but I was just going with the flow. It was a whole eye-opening experience for me.

So you went with the flow into a relationship?

Lmao. Yeah. And I probably shouldn’t have but I didn’t know that until much later.

Oh things became crazy. First was the possessiveness which I was not prepared for. Then there was the sex – so much of it – mind you, I am not complaining or saying I was taken advantage of. I just was so naive and not even half as exposed as she was and we were age mates.

How old were you at this point?

So this was, in a way, my introduction to these things and there was nothing enjoyable about it. It was a struggle from start to finish.

Ahahn. How so? I thought you just said the sex was great

Yeah. But apart from that, nothing more. Something shifted in the relationship once we made that jump. It was so much possessiveness, demands, attitudinal changes, wanting me to learn too many boyfriend shit too quickly, without giving me the time needed to blend into the role. I mean, up till that time, I was completely clueless about dating or even being with a girl in that intimate emotional sense.

Oh I see. So that afftected the relationship?

Yes, it did. It soon became tiring and I retreated back into my shell. She wasn’t so free anymore and I think her expectations of me changed and I was incapable of understanding or providing all those emotional needs. In a way, we were both just too young.

What could have been different?

She should have been a little more patient with me for one, instead of being pushy and expecting that because I am a guy, I had a factory-fitted ability to be a super boyfriend. And I could have been less naive, honestly. I’m definitely not rasing my sons the way my folks raised my brothers and me. We were damn too shielded.

How long before you guys broke up?

5 months I think. But heck, that was a blitzy introduction to sex and relationships.

LOL. That’s your major takeaway from the relationship