Pulse First Love: Our hatred for math brought us together

Pulse First Love: Our hatred for math brought us together 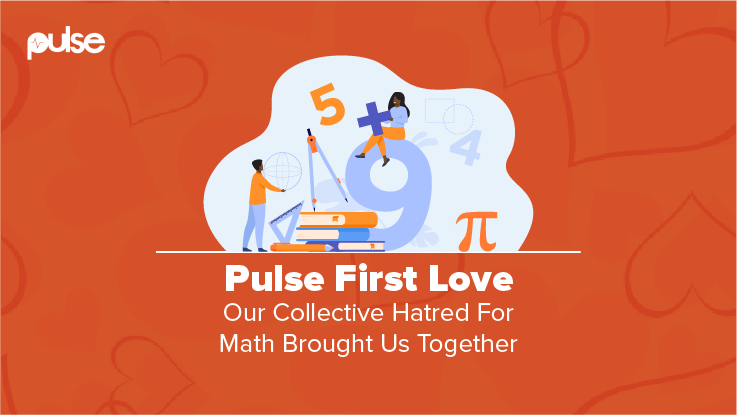 The subject of today’s #PulseFirstLove experienced a love that was a mix of friendship without benefits and a relationship without labels. He insists that that was his first love ever while recounting how that first relationship has shaped his love life till date.

Tell me about the first time you wooed a babe

Bruh. I am 30. LMAO. I honestly can’t remember anymore.

Ok. Ok. So you can’t remember because it’s been so long or because there have been many after that first time?

I honestly just can’t remember. But I know there was a time I wrote a letter to a girl in my class which ended up being passed around the class and everyone made fun of me. But I can’t remember if that was the first time I chyked a babe or not.

LMAO. I’m sorry but this is funny. How did that make you feel though?

In secondary school? It taught me to be more discreet actually and yes, women are scum. That was my first intro to that life. But otherwise, na cruise. Water under the bridge.

I feel you. Tell me about your first love

Tobi. Her name was Tobi. And one big bro in my church introduced us.

Ah, no o. We were just like15 that time. So what happened was funny. I was flunking Mathematics so terribly and my pops was worried in the months leading up to WAEC. So this bros agreed to help me but I had to be going to his house on Weekends. He was living at his sister’s house at the time sha, and the sister had a daughter my age who also happened to be preparing for the same exam.

Yeah. But the tutorials were for only me. Nothing happened for the first month or so, but soon, the woman asked her daughter to join us. So the bros started teaching both of us. That was sha the beginning.

So you guys fell in love over simultaneous equations and stuff?

Lmao. Yeah, we did but we never dated. That was the only thing we never did if you catch my drift.

No. I don’t catch your drift o.

Hahaha. You’re cracking me up. But I meant that we did a lot of exploration. Juvenile exploration of each other’s bodies but we never dated. I don’t know why. We just didn’t.

So… sex without commitment?

I wouldn’t exactly call it that even though we indeed had sex and never dated but it was more of us not putting labels on it. I liked her, I think she liked me too but we never broached the topic with each other. Maybe because we were too young. Maybe because it was easier to stay friends while getting all the benefits of a relationship rather than attempting a relationship. To be honest, the thing didn’t even cross my mind at the time.

But you still consider this your first love. Why?

It is what it is. I am older now and I know surely that what we had was love. It was just without labels. If we were like 20 or maybe 21 at the time, we would have had labels on it for sure. At least I’d have been wise enough to actually try.

And you think she’s have been on board with the idea?

How were you able to pull off a sexual relationship given the circumstance though?

You know, having a tutor, plus being at her house at all times…

Oh! The lessons were only happening on weekends now. I had the easy excuse of going over to do maths practice on some weekdays. LMAO. My parents loved my enthusiasm and I think her folks didn’t mind too. Besides, her folks and her uncle went to work on weekdays. They were never around. She was also the firstborn. She had two brothers – twins, actually – those ones were always playing Play Station so…

Exactly. But we also didn’t have a lot of sex, I must add. Maybe once or twice in the whole of four or five months. We just made out a lot. Like, a whole lot. Everything ended when the exam came. Her family didn’t attend my church. It was just her uncle. So, I had no opportunity to see her that much anymore. The thing just faded like that.

Did your first love affect your dating life in any way?

Interesting that you asked. I think it did. For the longest time, I always tried to get the coochie without any form of commitment. Maybe it’s unconnected sha. But I was so obsessed with just having sex with every girl I met, even if I like them so much. Instead of trying to boo up, my own was to try to take their panties off.

How long did this phase go on?

Oh, 300L in Uni. I fell heavily in love with one of the babes I was smashing. Actually, I liked her from the onset. The sex only came as per my normal routine of seeking out sexual relationships without commitment. This time around though, I could not help it. I wanted the sex and the commitment.

Yes. LMAO. She caught me. And I really liked it with her. I was already dreaming of going the whole way with her sef. Marriage, kids… all that. We seemed like we could get there at some point.

Yeah. We were together till we left uni. We just could not keep up afterward. Communication issues plus distance crushed all that.

Thank you. But we have moved past all that.

What was the last you heard of Tobi?

Can’t remember oh. Last thing I remember was hearing she gained admission and we texted each other a few times. But that was such a long time ago. I don’t know anything about her anymore.

Did you pass that WAEC Maths?