Pulse First Love We039ve been going on and off for 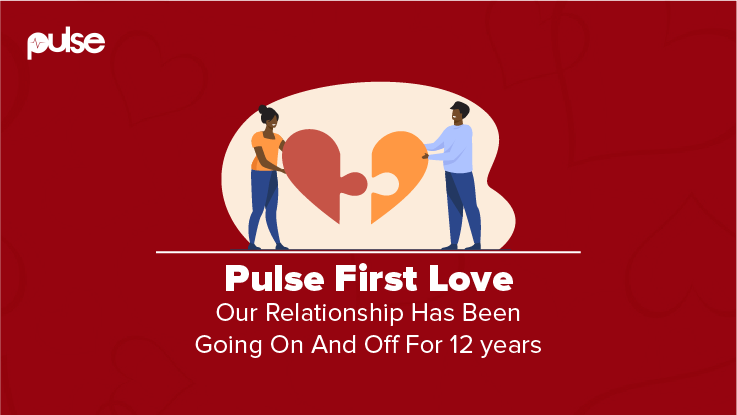 Today’s #PulseFirstLove story is about the kind of relationship which seems to always flourish, no matter how many times it gets abandoned. Our subject says for 12 years, she and her first love keep coming back to each other in ways that defy logic. She also speaks about her hopes for their future.

Can you remember the first ever time your folks spoke to you about love and dating?

I was in secondary school then and one of my teachers was using my gist to score cheap points with my mum. So she told her that I’m always around one boy like that and that I might be spending my pocket money on him. We’re a bit comfortable and I guess that my teacher just wanted to be in my family’s good books. She was nice sha and apart from the occasional aproko to my mum, I kinda liked her.

And was she right about what she told your mum?

What was your mum’s reaction to hearing all this?

Surprisingly, she was cool. I had seen folks on TV being all dramatic with their daughters when it came to boys’ matters, so I kinda expected the same from her but she was pretty cool about it. She just said to be careful and not to do anything stupid, and also that I could tell her anything. I didn’t trust her enough to tell her things I was already doing, but it was nice to hear her say all that. That was even the foundation of us being super-close till date.

What and what were you already doing that you were not telling her?

So, what that my teacher told my mum was only a part of the grand picture. I was being nice and sharing most of my stuff with him as a way of preparing him for when I’d make a move on him.

It’s funny that I was moving that sleekly at 14. I was in SS2 at this point, mind you, and I was strategically shooting shots.

Who sold liver for you at that age? And did it work?

Lol. My brother, I don’t even know where that liver came from oh. Must be from seeing too many high school movies. But yeah, I made the move during lunch break one time like that and it clicked nicely. SMH. Men are so cheap. All ages and sizes, y’all are just so easy to get.

I think its because we just don’t like stressing women

So how was that relationship?

Amazing oh. We are actually still together now, 12 years after.

Ahahnn. Best in what? Best in romance!

Wow. This is actually amazing. How have you managed it for this long?

Well, it has not been straightforward oh. It has been a bit messy, sometimes chaotic, there have been disconnection, tears, disappointment, reconnection and a bit of luck as well. Honestly, I think luck played the biggest part.

Before you talk about luck, let’s talk about the mess and chaos you experienced

Ok. For starters, our relationship in secondary school was rubbish. But that was understandable, we were so young back then. We would fight about stupid things, like him playing with other girls or sitting with them for long instead of being with me. You know, silly things like that. And that’s funny because I am still such an attention-seeking person but a more adult, and wiser version of it, who understands that she can’t have her way all the time. But it was not always like that.

Is this what brought about the chaos?

Well, in a way, yes. We were always angry at each other. LOL. But we loved each other and our friends back then [stupid teenagers like us] would always mediate and serve as middlemen to bring us back together. We were sha together till the end of secondary school.

Read Also  How my hot temper made me slap my wife

We were still together oh. My mum, true to her earlier promise, had no issues with me visiting and him visiting our house. At ours, there was a bit of parental supervision. But at theirs, not so much. He had two older brothers who couldn’t be bothered. So that meant we usually had privacy – maybe a little too much. And because we always had enough loose change our time spent together was always quite nice. I really liked that part of us waiting for WAEC results, writing JAMB and waiting to gain admission. That period was really nice. We still bickered and had childish love fights but not so much. Then we gained admission and chaos returned.

Different universities. Different locations. Of course, we chose the same schools but admission clicked for him in the second choice school and for me in the first choice school. We were both in the east though and the plan was to try and visit each other when possible. That never happened.

Yeah. You know now, school environment was choked full of other young, fine people. It was easy to get carried away. Plus acclimatizing to the new life took its own toll as well. I guess we both got carried away.

Not at first but eventually, yeah. Communication lapses showed, attractions took hold with other people, feelings were caught. I’m speaking about what happened on my own end oh. And apparently on his own end too, as I would later find out. So we just kinda drifted apart.

And you never used to see each other during holidays?

Our holidays didn’t clash much except during Christmas and all. Plus, he was spending more time in the east and would not come to Lagos unless he really had to. We avoided each other as much as we could sha. Just the occasional hi and hello here and there. And then NYSC came and we both ended up in Abuja. We saw in camp and slowly sparks started flying again. This was in 2016.

Hehehe. You can’t run away from each other it seems

Abi. It really does feel that way. Nothing happened in camp sha, although we spent a significant amount of time together, mostly sharing old memories. I guess that made us cool again. You know, just distant friends. Distant because I redeployed to Lagos as my dad had got a better placement for me there. So I went back to do my NYSC in Lag. He stayed here in Abuja. He’s been here since.

I had wanted to serve in Abuja because we had a family friend who wanted to link me up with a company. After NYSC, the job clicked and I went back to Abuja in 2018. He saw that I was in Abuja on my IG and reached out. I was kind of dribbling him for 3 or 4 months but eventually, we linked up and somehow, he hoodwinked me into dating him again.

Oh. Absolutely. Apart from the fact that he’s grown to be such a gorgeous man, we’re older now and while I won’t go as far as saying we always loved each other, I think we both always had something for each other that we didn’t outgrow. And I’m so glad we didn’t, really.

Not to put you under any pressure, but do you think this time would be forever?

Forever sounds nice. But it’s also a lot. Not like I mind sha. But we’re both young so no rush with that one. Absolutely no rush.