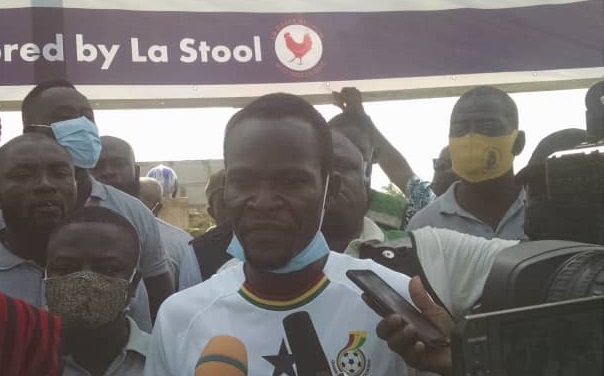 The Coalition of La Associations (COLA) has asked the government to have confidence in their ability to manage resources and release their lands to them.

Addressing a press conference at La, the spokesperson of COLA, Mr Jeffrey Tetteh, reaffirmed that the consensus reached during their previous meeting with the Ministry of Lands and Natural Resources still binds on the current Minister.

He stressed that any attempt to alter the earlier decisions or re-open negotiations on the matter will not only be a sign of disrespect to the Chiefs and people of La but also a mockery of the time-consuming two-year-long consensus-building process engaged in by all interested parties.

“We will not accept any attempt to renegotiate or alter the earlier decisions reached on the subject matter,” he said.

The association is also calling on the Speaker of Parliament, Mr Alban Bagbin to institute a bi-partisan probe into the events on Thursday, April 15, 2021, in which the Ghana Armed Forces assaulted some civilians.

They also want the perpetrators especially those who issued the orders for the acts to face the laws of the state.

According to them, the people of La shall not relent on their efforts to gain control of lands fought for and gained through the toils and blood of their forefathers.

“We remain resolute and nothing will stop us,” Mr Tetteh stressed.

They further indicated that the people of La have never given lands directly to the Ghana Armed Forces indicating that it is the government of Ghana they have over the years dealt with and that shall continue to deal with.

Speaking to Graphic Online after the press conference, the President of COLA, Mr Oscar Nii Odoi Glover, said the government must have confidence in the people of La and give back to them what is due them. He emphasised that the land when released to them will be used judiciously to the benefit of the entire La.

COLA also commiserated with all persons who were injured when the Ghana Armed Forces quelled a protest on Thursday (April 15, 2021) at La in Accra.