Saglemi Housing: Atta Akyea on why no one has been prosecuted yet 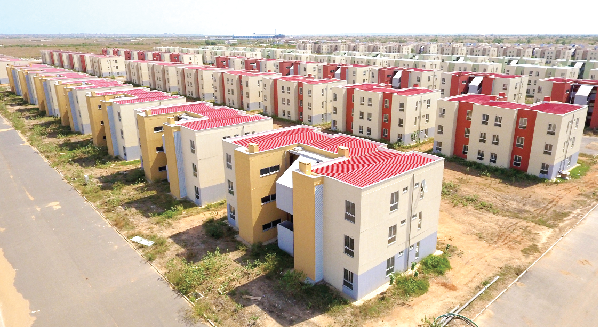 Saglemi Housing: Atta Akyea on why no one has been prosecuted yet

Former Works and Housing Minister, Mr Samuel Atta Akyea has been explaining why nobody has been prosecuted yet in the ‘abandoned’ Saglemi Housing project even though the government has given an indication of some wrongdoings in the project.

He says the case is with the Criminal Investigations Department (CID) of the Ghana Police Service and the Attorney-General, and it is up to them to conclude their investigations and prefer charges against the suspects in line with criminal processes.

To Mr Atta Akyea, as far as he was concerned, before he left office as the sector minister, he was aware the police had already taken statements from a former sector Minister, Mr Collins Dauda and former Chief Director of the ministry, Alhaji Ziblim.

The rest, he said was up to those empowered with the investigative and prosecutorial powers under the rule of law to proceed with the matter.

Why project has stalled?

The Ministry of Works and Housing has said that the 5,000 units at a total cost of US$200million as stipulated in the financing agreement presented to, and approved by Parliament had “surreptitiously, and drastically, reduced to 1,502, of which 1,389 units had been completed without a commensurate reduction in the overall loan financing.”

Electric power and water are yet to be extended to the area. The sewage system is also not complete hence the buildings cannot be occupied in its current state.

Currently, an amount of approximately, US$197million representing 98 percent has been expended on 1,502 units as against the planned 5,000 units,” the current sector Minister, Mr Francis Asenso-Boakye said at press briefing on Tuesday.

His reaction followed a video shared by the leader of the All Peoples Congress (APC), Mr Hassan Ayariga, who had visited the project site last Friday and expressed anger about why the project had been abandoned.

Earlier, Mr Asenso-Boakye when he assumed office as the new minister in the sector visited the project site and assured that it will be completed.

But Ayariga’s video on social media has ignited a public discussion on why if government indeed claims there was a wrongdoing on the project, why the said culprits were not being dealt with in line with the law.

Mr Ayariga in his video, which has gone viral had actually indicated and encouraged people to move in and take over the buildings so that they don’t go waste.

But reacting to that instigation, Mr Asenso-Boakye said, Ayariga’s video was a populist action.

Related: Ayariga video on Saglemi is populist and diabolical – Asenso-Boakye

He explained that there was still a chunk of works to be done on the project by extending electricity and water supply to the area which will require an additional funding of approximately US$32million.

On Accra based radio station, Oman FM’s Boiling Point programme on Tuesday night, April 27, 2021, monitored by Graphic Online, the matter came up for discussion, and the panelists and host sought to question government’s slow attitude or inaction in bringing the said culprits to book four years after a New Patriotic Party government, if indeed there was any wrongdoing.

His response in Parliament repeated the fact that the units were reduced from 5000 to 1502 whilst the cost remained the same and even went ahead to state that US$80million representing 40 percent of the amount was paid to the contractor as mobilisation without a guarantee, which should have been the norm.

The host and panelists of the radio programme therefore sought to question what Mr Atta Akyea did to solve the issue whilst he was still the sector minister.

Mr Atta Akyea therefore phoned into the programme and explained he cannot be blamed, since as a political appointee, he did what he could and reported the matter to the police.

He said he reported the matter to the president and the police CID was asked to conduct investigations.

He indicated he was aware the CID has taken statements from a number of people including Collins Dauda, the then sector Minister who started the project and the then Chief Director, Alhaji Ziblim.

I’m not the IGP

Asked why he did not ensure that they were brought to book, Mr Atta Akyea questioned if he was the “IGP”.

He said he only indicated that from the facts he was aware of, there was corruption involved and the criminal process ought to take them up but he [Atta Akyea] cannot be held for not doing anything about it.

He insisted it was up to the Inspector General of Police and the CID together with the Attorney-General to allow the criminal process to work and said the CID boss is the one to answer why the case is not moving forward.

He said he even initiated moves to continue the project and that was why the Ghana Institute of Surveyors offered to evaluate the project for the government as their contribution to national development so as to enable government to work to complete the project.

Mr Atta Akyea said a criminal case has no expiry date and that what was important at the moment was for government to look for the additional funding to continue and complete the project and deal with the “criminals” also.

“As for the criminals they will not run away, they [police] will take them to court,” he said.