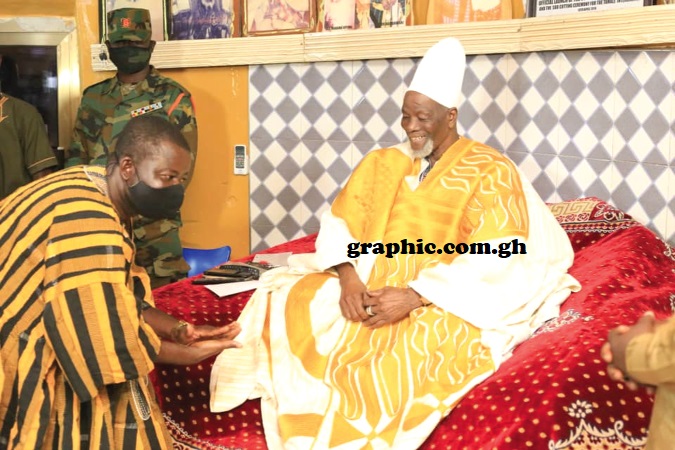 The Overlord of Dagbon, Ya-Na Abukari II, has urged people seeking to build residential or commercial properties to acquire permits from metropolitan, municipal and district assemblies (MMDAs) to ensure that the properties they develop conform to regulations.

He said merely buying land from allodial owners, which included traditional skins and stools, did not give the buyer the bona fide right to start development.

In his view, the enduring prominence of land disputes and unregulated development, with their associated flooding, were mainly due to the failure of land buyers to obtain building permits from the authorised state institutions.

Ya-Na Abukari made the call when he received the Director-General of the National Disaster Management Organisation (NADMO), Mr Eric Nana Agyemang Prempeh, at the Gbewaa Palace in Yendi last Wednesday.

The visit to the Gbewaa Palace formed part of the director-general’s engagement with traditional rulers to get their support in an ongoing sensitisation exercise in relation to the spillage of the Bagre Dam in Burkina Faso.

Nana Prempeh later visited the Mion-Lana, Mahamadu Abdulai, at his palace in Mion.

Scores of NADMO officials, including rescue teams, have, in an exercise known as Operation Thunderbolt 2020, pitched camp in the areas downstream of the White Volta in the Northern, Savannah and Upper West regions in readiness to prevent the flooding resulting from the spillage of the Bagre Dam from causing damage.

The spill gates of the dam were opened last Tuesday by Sonabel, the Burkinabe agency managing the dam, and the water is expected to reach the three regions in about a week’s time.

According to a statement NADMO received from Sonabel last Wednesday, the level of the dam had reached uncontrollable limits and there was no option but to spill the water.

Already, some community members have started moving to safe areas.

Areas that are likely to be directly affected by the spillage are Bawku West, Nabdam, Talensi and Pusiga in the Upper East Region; West Mamprusi, Mamprugu Magdori, East Mamprusi, Kumbungu, Karaga, Tolon and Savelugu in the Northern Region; Daboya and Central Gonja (Buipe) in the Savannah Region and Lawra in the Upper West Region.

Ya-Na Abukari commended Nana Prempeh and his team for the good work they were doing to protect lives and properties and promised to get all the chiefs under his authority to join in the campaign.

Briefing the Ya-Na on NADMO’s operations, Nana Prempeh said the massive presence of NADMO was important because of past experiences where the spillage of the Bagre Dam caused flooding in many local communities, resulting in loss of lives and properties.

He said the organisation was now putting a lot of emphasis on crisis prevention, which was the surest way to save lives and properties.

“I assure you that NADMO is ready for the task ahead with respect to the spillage,” he told the Ya-Na.

Nana Prempeh was accompanied by a Deputy Director-General of NADMO, Mr Shaibu Mahama; the Northern Regional Director of NADMO, Alhaji Hindu, and some staff of the organisation.