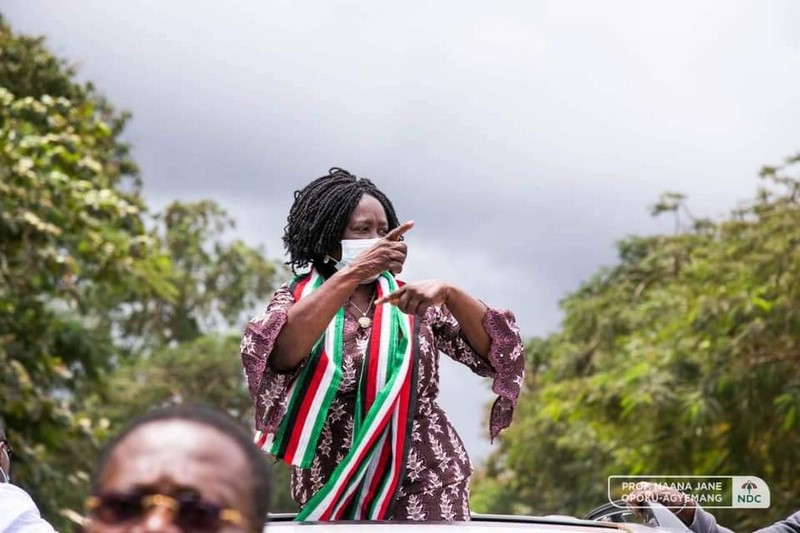 A video of vice-presidential candidate of the National Democratic Congress (NDC), Professor Naana Jane Opoku-Agyemang, touring a part of the Western region without a crowd, has gone viral.

In the video already making waves on social media, Prof. Opoku-Agyemang is seen waving residents from her V8 but the indigenes of the community looked unconcerned and went about their normal duties.

The video also showed the absence of party members in the area, leading many to question if the constituency executives of the party in the area did not make sufficient preparations ahead of the Vice-Presidential candidate’s visit.

Reacting to the video, the Western Regional Organiser, Japhet Baidoo, speaking on Adom FM’s Dwaso Nsem on Thursday, said it was a calculated attempt by some persons to destroy the image of Prof. Opoku-Agyemang.

According to him, people in the Western region accepted them and doubted the authenticity of the video making rounds.

“There is no way as a regional organiser I will allow Prof Opoku-Agyemang campaign alone, never I will not allow that. Ghanaians should disregard the video because it was taken with ill motive,” he added.

Listen to the organiser in audio below:

Prof. Opoku-Agyemang on Sunday began a four-day campaign tour of the region.

The tour comes on the heels of her recent visits to six out of the nation’s 16 regions.

Watch video of her tour above: