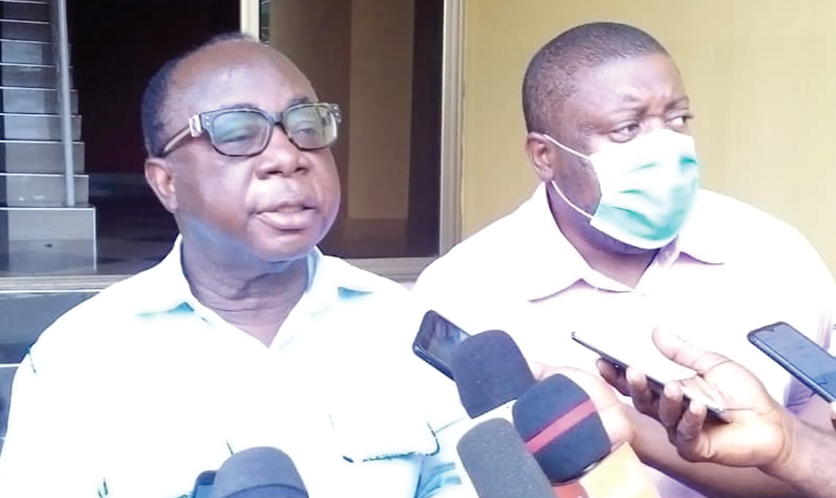 Mr Freddy Blay (left), National Chairman of the NPP and Mr Henry Nana Boakye (right) briefing the media after the meeting with constituency executives in Koforidua

The National Chairman of the New Patriotic Party (NPP), Mr Freddy Blay, has asked the rank and file of the party to desist from projecting anybody who wishes to contest the presidential slot for the 2024 general election.

He explained that such an attitude would divide the attention of the President in focusing on the NPP’s development agenda that would make it easy for the party to retain power.

He warned that the party’s constitution would deal with anybody within the party who flouted it.

Mr Blay gave the caution when he, together with other national executive members of the party, met the 33 constituency executive members, as well as Municipal and District Chief Executives (MDCEs) to end the party’s “thank you” tour of the Eastern Region last Wednesday.

The  tour to the Eastern Region was to express appreciation to constituency executive members for their support which enabled the party to win the 2020 general election.

It was also to enable the national executive members to get in touch with the grassroots of the party to identify their concerns for redress.

According to Mr Blay, the grassroot of the party was a powerful force to reckon with, hence the need for them to support the Akufo-Addo  led administration to enhance the party’s chances of winning the 2024 general election.

That, he said, would break the eight-year cycle of regime change.

On his part, the General Secretary of the NPP, Mr John Boadu, who briefed the media, stated that the unique nature of the party made it possible for it to collate the 2020 election results within seven hours after the election, a feat which was unprecedented.

The party, he indicated, was also able to annex the Adeiso seat which used to be a stronghold of the National Democratic Congress (NDC) and praised the regional executive members for “a wonderful job.”