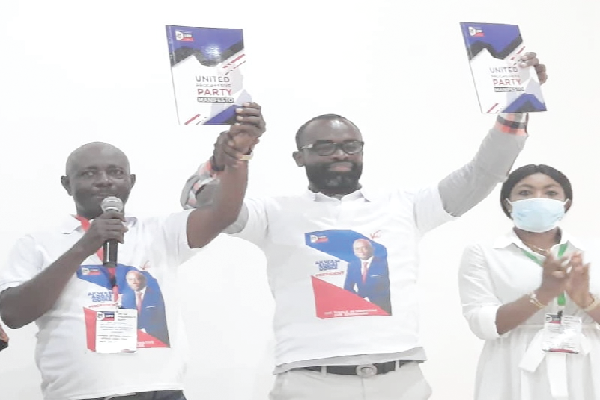 From left to right: Akwasi Addai, Kenneth Asamoah, first Vice-Chairman of the party, and Mrs Addai, wife of the flag bearer

At the party’s second national delegates congress in Kumasi, the party also launched its manifesto for the 2020 general election as well as elected national executive officers for the party.

Addressing the delegates, Mr Addai, popularly known as Odike, said the UPP was the best alternative to both the New Patriotic Party (NPP) and the National Democratic Congress (NDC) and asked Ghanaians to vote for the party to change their destiny.

The 46-page manifesto is mainly about human development and decentralisation of the governance system to the doorsteps of the people.

Giving excerpts of the manifesto, the leader of UPP said as part of the human resource development policy of the party, a UPP government would set up special schools for science, arts and technical education and would equip such schools with the needed tools to produce the needed manpower for the development of the country.

For instance, he said, instead of having secondary schools offering all courses, they would be made to specialise in one course where students offering such courses would be sent to.

Mr Addai was of the view that, that would better maximise the use of the tools than having them scattered all over the country and in short supply.

He said within the first 100 days, a UPP government would review the Constitution to reduce the executive powers of the President and give them to the people.

According to him, the Constitution had given too much power to the President which, he said, had been abused by past Presidents and said it was time those powers were reduced.

“The Constitution is the bane of our suffering. Within the first 100 days in power, we will review the Constitution to reduce the powers of the President and transfer them to the citizenry,” he said.

He said that would enable the people to hold the President accountable and not allow any President to lord it over the people.