Women Talk Sex: I’d rather be with an endowed man who is bad at sex

Women Talk Sex: I’d rather be with an endowed man who is bad at sex 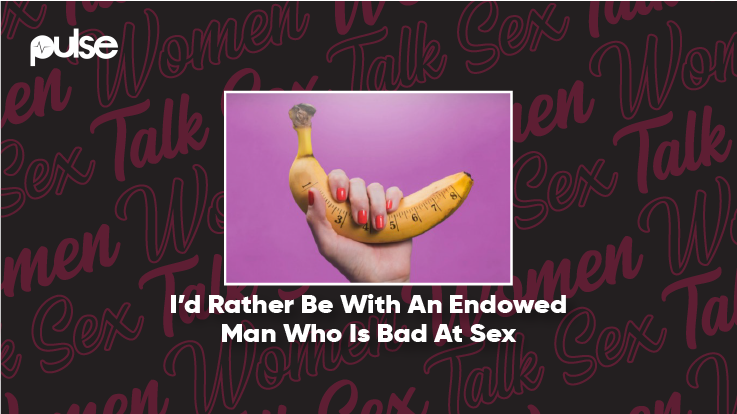 This week’s #WomenTalkSex focuses on sex with endowed men. Our subject, introduced to this big flex at the very onset of her sex life, speaks on the peaks and troughs of being with a man bigger than average, and its influence on how she now approaches romantic and sexual relationships.

When was the first time you ever had sex?

Biggest expectation you had for sex before you started having it?

That it would hurt. Really didn’t have much expectation than that. I have always heard that the first time hurts and it did hurt me for a long time. Although there is also one other reason…

He had a big penis. I didn’t know how big it was at the time because I had nothing to compare it with. Having been with other guys now, I realise how big he was. That nigga was slinging!

LMAO. How big was he? Do you know?

Ah. I am not sure o. I really wasn’t calculating at the time. I was young and clueless, remember?

If that guy wasn’t a full 8 or 9 inches, na small remain.

It used to hurt. Took me like 3 months of gradual attempts before I lost my virginity, I think.

Oh, he was my first o. My very first. After I opened up, his size still felt crazy. But then we both used to think it was because I just lost my virginity. Didn’t know it was because of baba’s size. Big dick is uncomfortable at first. But when it is the only thing you are getting on a regular, you naturally get used to it.

Word. So you just bore it till you got used to it?

We were both young and naive. And we didn’t know better. So, yes. I toughed it out. I didn’t even know about KY Gel and other lubes until after uni. By then we had since stopped smashing.

Let’s say you met someone like him again, what would you do differently?

Lube. Plenty plenty lube. Then, I also think the ignorance of my body and of sex generally didn’t help. I don’t think I used to consciously drink enough water at the time like I do now. Foreplay as well. But thankfully, we got that one right sha. Because we both enjoyed kissing and he just loved touching my boobs and doing things to them. Wait, is this too much information?

Ok. So yes. Lube, plenty foreplay and more preparedness, knowing what I am going up against.

Lmaooo. It’s not a battle now

Look at you. You wouldn’t know na.

True. I wouldn’t. What do you think he could have done differently?

Nothing, really. He was super-patient most of the time. But baba still wanted to nut so he had to do what he had to do. Lol. Can’t blame him.

I think it is important for men with big dicks to realise that while women want to feel stretched out and filled up, you need to be patient with it. Let’s find our rhythm and then we can increase the tempo from there. And do I have to mention that prolonged foreplay is important?

Goes without saying. So did that first experience affect your sex life and expectations subsequently?

Yesssssss. And I wasn’t prepared for it. Coming from having sex with that guy for like a year, taking a break for a while and then getting with someone who was considerably smaller than him… it was… I don’t want to say disappointing because the guy was not a small dick nigga like that but he was just smaller sha. And it felt below expectation at first.

When something is the only thing that you’ve ever known, any significant difference will surely be noticed. I eventually relaxed and got used to normal-sized D’s sha.

Which do you prefer – big or average? I figured small ones are not to even be considered

Hahahahahha. This guy. Do I have to answer that?

You can decline it if you don’t want to answer

No. It’s fine. I’ll answer. I prefer the big D’s. I don’t know if this is me just trying to relive the past because ever since that first time, I have never had that size again. And knowing what I know now, I am sure that even he is not the biggest size around. So why settle for less when such things exist in the world?

I feel like I just dragged all the men I’ve been with and even my current partner.

It’s OK. Consensus is that the quality of a penis is not in size but usage. How do you feel about that?

Well, I don’t want to say it’s wrong. But I’d prefer someone with a nice size who is clueless than someone who knows what he’s doing but comes with a small package. Cluelessness can be helped. Size can’t. And lowkey, I think that’s what most women want even if some say otherwise.

I hear you. Rate men over 10 based on your experience

6. The real sex machines are too few. Because in my experience, even the ones that claim to be good are usually just manageable. Not saying guys that will blow your mind don’t exist o. But they are very few. I have met only one so far.

Wanna talk about how that went?

See! That guy did things to me that I wish I could experience everyday. Like, tongue o, fingers o, kissing o, head o, everything just felt so good. Even the way he’d look at me sometimes sef, I don wet. And his stroke game was A1. Only small issue is that I wish he was just a little bigger than he is. I’d have probably been stalking him for life. Lmao. He was still perfect regardless sha.

Ah. I will never forget the idiot that tried to finger with long nails.

See. Some people are just stupid in this life. I stopped him of course.

Pestering women for sex is just lame. If I want to fuck a guy, I already know. I might do shakara for a bit o, but because I am interested, I won’t let it go on for too long. So if a babe is saying no over and over again, she’s not inviting you to put in pressure, she wants you to fuck off.

I know. Random question. How long should sex last for?

Hehehe. I saw this conversation flying around recently. After the first round 7-10minutes. That’s when sex is actually lit. All the gragra in the guy’s body would have gone with the first round.

And how many rounds is ideal in your world?

Two. Although I have done six rounds one time like that during my service year. Lmao. I was so jobless then.

What’s one sex thing you will never do

Serious o. I always wonder about that. The embarrassment would be boundless plus I heard it hurts. So I’ll pass. [This Women Talk Sex episode actually focuses on embarrassing sex]

Advanced sex toys. Those expensive ones. But I’m too broke for them now.

Tell me your relationship with sex toys

Recommend a sex position that men can always impress women with, based on your experience

Missionary. But with a pillow under the babe. The depth and intensity is out of this world. 10 over 10. Recommend fully.

Any acrobatic nonsense. Please take it away from me. I’m stiff and I know it. Even doggy sef, I am not much of a fan. I am lazy in the bedroom o. But I want to get all the pleasure in the world without much fuss. Is that too much for a girl to ask?

So you’d know sex positions for lazy women. Recommend for other babes like you who don’t like gymnastics in the sack

That’s what I already mentioned now. Missionary. Or the collapsed doggy.

There should be an image on Google. I really can’t explain it well but the woman just lies on her stomach with her legs closed and the man enters from behind. Premium laziness. Premium enjoyment.

Kissing. See ehn. People disrespect kissing so much but it is elite foreplay. You kiss the lips, the neck, shoulders, navel, thighs, back of the legs, everywhere. Even head sef, when you think about it, it’s a form of kissing.

Lady recounts her boyfriend made her cook, clean his place, not knowing she was doing it for another girl