Women Talk Sex Ive been sexualized all my life because 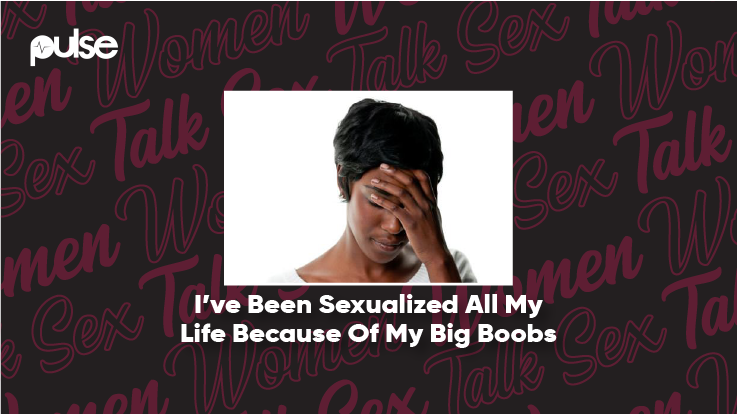 #WomenTalkSexByPulse this week gets a little emotional as our subject narrates the experience of having to swat away unwanted attention to her body for more than half her life. She speaks of her teenage struggles and the difficulties of having a normal sex life amidst all of this, even as an adult.

Tell me about your earliest recollection of sex

My folks were very religious. Deeply, deeply religious and very prudish people – especially my father, God rest his soul. My mum wasn’t any better. So it wasn’t until uni that I had sex for the very first time.

Interesting. But you surely knew about it before then

Oh definitely. I had all sorts of nasty kids in my class throughout primary and secondary school. I grew up with 3 sisters and we were all insanely guarded by our folks. So we only had access to stuff they didn’t want us to know when we went to school. And, damn, I got an earful in secondary school especially.

It’s been a bit but I remember these two girls especially. Let me call them Ruth and Kate. They were wild with it. Stories, gist, some pornographic pictures and videos on prohibited phones… the works. It was mindblowing at the time, you know, hearing them share gist of what the penises they’d seen looked like and then the photos and videos of white men and women having unrealistic sex. Those were my foundations if I can call it that.

Yeah. I got to uni and I felt it in my head that I could do whatever I wanted. My big sister felt the same way, too, and she was quicker to lose herself in the freedom university gave us but I found it more difficult o let go of those inhibitions our folks had placed on us for so long. Eventually sha, sometime in my 200L, I dated this guy and decided to try sex but when he whipped out his penis, I lost my liver. [Loud laughter]

Read Also  Tiv Culture: A brief walk into the lives of one of the world's greatest storytellers

I kid you not! I just could not, fam. In the end, we broke up without even having sex because I was just too scared. [Speaking of fear, you totally need to check out this Women Talk Sex edition about avoiding 30+ men]

Interesting. What’s your sex life been like since then?

I’m a lot older than I was then. But, for the most part, I’m still pretty cautious and scared about sex.

Uhm, ok, I’ve always had reasons to be wary of sex and sexual connections. Varying reasons. From the initial inhibition that my parents worked into the minds of my sisters and me, to my own battle with body issues and then my apparent dislike for casual sex at some point. Omo, issues, o por.

Wow. That’s a lot to unpack

Tell me about the body issue part

Thanks. So it started becoming obvious when I was only a teenager in secondary school. This was me being about 13/14 and having boobs of a breastfeeding mum, you get what I mean. My frame was slight, I was young and innocent, I didn’t know how to handle the attention from boys, the comments from girls and teachers, and other perverted older people. See, it was just a whole lot. And remember how I said my mum was a prude? That didn’t help either because I felt she could have spoken to me about it, or at least be kinder than she was to me while I was navigating that difficult period of growing into my new body. I think it’s even worse, considering the fact that I legit got the boobs from her.

Wow. So sorry about all that

Yeah. Times have changed now, thankfully. I’m older and apart from that, the body positivity campaign on social media helped as well. I mean, everyone likes big boobs now and there are more people that are proud of having big boobs. So I guess in a way, the worst part is behind me. [This previous edition also focuses on how body issues affects the sex lives of women]

Yeah, yeah. Having big boobs is still not without its difficulties sha, but yeah, being an adult, and having more resources to help understand one’s body is great.

Tell me about the impact of all this on your sex life?

See, I’ve been hyper-sexualized all my life because of my big boobs. Ok, maybe not all my life but if something has happened all your teenage years and into your adult life, we might as well say it’s been on for all your life then. I’m 27 this year. So I’ve been unnecessarily sexualized for half of that. And it’s insane. Men making lewd remarks from as far back as when I was a teenager, older men using style to rub up on you, or even worse, being blatantly groped. Just this week, I posted a fleet on Twitter and someone DM’d me to say I had “nice dick-sucking lips and that he’d like to cum on my boobs.”

I think the worst one was a friend I had while growing up. We kinda grew up together and he was a nice guy that I was really comfortable with. He was someone I could be with braless – and I am insanely conscious of my body that I rarely do that – until he started being mad obsessed with my body and he actively started to try to fuck me. I typically didn’t want to because I wanted us to stay friends but he really, really wanted it till one day he went from asking to kiss me to actually grabbing my boobs. That was a line crossed and I think he knew it too.

I didn’t say anything out of shock and respect for him but he was full of apologies and excused himself. To even think I kinda understood that it was a one-time thing and wanted us to stay friends! But he said he could not be friends with me anymore because of how he now sexually attracted he felt to me. I mean, I respected that but it didn’t make it less painful. I have had guys come on to me in worse ways but this one pains me the most sha. So, yeah, that is my life story.

Read Also  Ex-lover demands over GHS140,000 from lady who dumped him for a ‘Sugar Daddy’

I’m terribly sorry to hear that

Maybe I should have fucked him back then sha. LOL. Because I see his IG pictures now and I’m like… “Grrrr! I’d totally smash that.”

So which one word would you use to describe your sex life if you could?

Stressful. Fam, I am constantly trying to balance being sexy with being sexual without having my boundaries crashed into.

I love to have fun a lot and live my life with my friends. I love to wear sexy outfits and you know, live! But then it usually has people being weird and saying stupid things to me. And then I really sometimes want to have more sex but not with people who see me as only a piece of abundant flesh to fulfill their dirty desires. You get what I mean? Like, I do love me some great, no-holds-barred sex oh, but for me, my experiences always make it difficult to completely let go. And though it can be frustrating sometimes, I think it is better this way.

I feel you. Rate your sex skills over 10 though

Hahahaha. I think I’m kinda dead. By virtue of not-too-much experience. I’m a 5. Even though everyone thinks I’m a bad bitch. SMH.

How about Nigerian men. Rate them over 10

Disgusting pieces of shit, most of them. But I heard they lay good pipe though. So 7 from what I heard.

From your own experiences nko?

6. But I wouldn’t place too much trust in that sha because I’m usually in my head during sex so that might have affected the overall experience for me and for them.